While most Apple acquisitions become public knowledge shortly after they happen, there are acquisitions that go largely under the radar until months or years afterwards. TechCrunch has recently learned of one such acquisition, which may have happened in 2013. Apple is said to have purchased Ottocat, a small startup specializing in search technology.

Ottocat's technology is said to be behind the "Explore" app discovery function in the App Store. The Explore tab in the iOS App Store lets users find apps in different categories plus nearby apps. 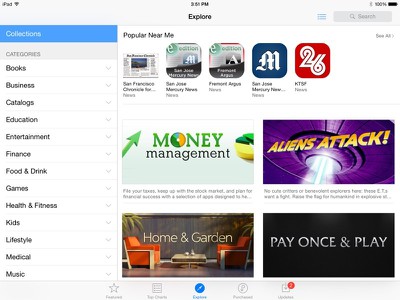 TechCrunch has learned that Apple quietly bought a startup called Ottocat some time ago, which had developed a system to organize and surface apps on the app store based on "nested" categories of increasing specificity. A version of that system now powers the "explore" tab in Apple's app store.

According to TechCrunch, though there's little evidence on LinkedIn to suggest the acquisition happened, Ottocat co-founder Edwin Cooper was the author of a patent that was granted to Apple, which Cooper appears to have filed as an Apple employee. The patent, "System and Method for Divisive Textual Clustering by Label Selection Using Variant-Weighted TFDIF," which is related to the App Store's explore feature.

TechCrunch has some information on how Ottocat worked, explaining that its technology aimed to introduce categories for better app discovery to assist users looking to find apps in specific areas when they didn't have an app in mind to search for, which sounds very similar to what the Explore feature in the App Store does.

The premise was to do away with keywords by categorizing apps into increasingly more specific subcategories that worked on a "drill-down" principle -- eliminating the guesswork and potential inaccuracy of keywords altogether.

The Ottocat website originally went down in October of 2013, so that may have been around the time that the acquisition occurred. The original error message stated "Ottocat is no longer available," but the website is now completely defunct. Explore was announced as an App Store addition in June of 2014.

Traverse
I find it much more useful than that "Popular Near Me" feature.
Score: 5 Votes (Like | Disagree)

I'd like to see Apple find a way to make this kind of intelligent app organisation help us organise our apps on each device. Our iPads have hundreds of apps, and it makes sense to have similar apps grouped together on each screen. Manually dragging each app between 10 different screens is laborious and prone to frustration (apps sometimes refusing to go where you want, flow on effects when an app goes where you didn't mean it to, sometimes weird and unpredictable placement of apps that were previously hidden when you hit the maximum number of screens, etc). Managing apps has become the most cumbersome thing about using an iOS device IMO. I'm surprised Apple hasn't responded to this challenge with a really clever Apple-like solution yet.

Too bad they didn't have some sort of folder-like system that you could drag everything into, with custom names and everything.

I guess we'll have to wait and see what Apple has in store for us when iPhone OS 4 rolls out.
Score: 2 Votes (Like | Disagree)

Can you purchase apps and selectively install to any owned device from any browser like Google Play?


The closest you can do to this is selecting "Automatic Downloads" on the iOS device in Settings > iTunes & App Store. This way when you purchase an app on another device, it will begin to download automatically on said iOS device. You cannot selectively send to a specific device.
Score: 1 Votes (Like | Disagree)

Col4bin
Remember Apple's exclusive license for Liquidmetal--all that initial speculation and excitement from 5 years ago? So when that stuff officially starts showing up in Apple products, that will really blow people's minds....(Yup, still waiting.)
Score: 1 Votes (Like | Disagree)

mi7chy
Can you purchase apps and selectively install to any owned device from any browser like Google Play?
Score: 1 Votes (Like | Disagree)

RockSpider
It should tell you how much the app is going to eventually cost you, now that would be helpful.
Score: 1 Votes (Like | Disagree)
Read All Comments

Thursday June 24, 2021 5:45 am PDT by Hartley Charlton
The highly reliable Apple leaker known as "Kang" and a number of other unspecified leakers have reportedly received warnings from lawyers representing Apple. According to posts on Kang's Weibo account, Apple recently commissioned a law firm to send admonitory letters to a number of leakers. The letter purportedly cautioned leakers that they must not disclose information about unreleased...
Read Full Article • 166 comments

Wednesday June 23, 2021 5:07 am PDT by Sami Fathi
Apple earlier today published a detailed report outlining in blatant terms the negative impact that sideloading would have on the iPhone and iPad, specifically calling out the impacts it would have on user privacy and security. Now, the company is continuing its PR push, with an executive noting in an interview that users who wish to sideload apps already have that option thanks to other...
Read Full Article • 412 comments

Wednesday June 23, 2021 9:37 am PDT by Joe Rossignol
Apple Watch Series 7 could feature a smaller "S7" chip, potentially providing more space for a larger battery or other components. According to a paywalled preview of a DigiTimes report accessed by MacRumors, next-generation Apple Watch models will adopt double-sided System in Package (SiP) packaging from Taiwanese supplier ASE Technology. On its website, ASE Technology confirms that its...
Read Full Article • 101 comments