From the Forums: Retina MacBook Opinions and Discussion

Apple's recently announced 12-inch Retina MacBook has been met with both praise and criticism ahead of its upcoming release on April 10. The new MacBook, positioned at the lower end of Apple's notebook lineup, paves the way for the future with an ultra-thin design, one USB-C port, redesigned keyboard with an all-new butterfly mechanism, Force Touch trackpad, fanless architecture and all-day battery life. 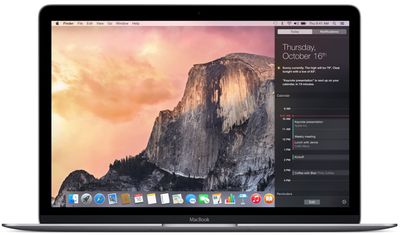 At the same time, the new MacBook has been criticized for having an Intel Core M processor, a system-on-a-chip that Intel typically markets for use in mobile devices. The single USB-C port, which combines power, USB, DisplayPort, HDMI and VGA connections into one, is also an area of concern for some, especially given that costly adapters must be used to connect many external devices and peripherals to the notebook.

Look no further than this parody of an Apple engineer talking about the Retina MacBook on YouTube, where it has amassed over 5 million views since being uploaded in early March. The video pokes fun at the Retina MacBook for, among other reasons, having one port and a 480p front-facing camera. Rest assured, the parody's creator Armando Ferreira is an Apple fan that owns an iPad and a few MacBooks himself.


While waiting for Apple to lift its embargo for large tech publications to publish their in-depth Retina MacBook reviews, we've sifted through the MacRumors forums and highlighted some of the more interesting discussions about the notebook. Read ahead for a roundup of opinions and noteworthy comments about the Retina MacBook, and be sure to join the conversation within the discussion forums.

Visit our MacBook section within the forums to keep up with the latest discussions.

Why is it so hard for people to understand that this MacBook caters to users who just browse the Internet and email themselves their documents? Nobody is forcing you buy this model, and the MacBook Pro still has some ports.

Any choice or variety beyond that gets them extremely riled up :)

I suspect the reason there has been so much animosity towards this Macbook (a bit from me as well) is because they were hoping for a different product. Most people were hoping for a redesigned Macbook Air with a Retina display, but same class of CPU, same ports, same battery life.

Instead, Apple releases a dilemma - it's asking people to sacrifice ports and much more cash for a retina display, lower weight, and thinness. Plus, adding insult to injury, Apple has removed an very popular and well regarded feature - magsafe. To say nothing of the lower battery life rating. I don't blame people for being pissed at this dilemma.

Before the choice between MBA and MBP was relatively simple. Now for people with aging MBAs, the choice between rMB and MBA is not only tough, but it's forces a sacrifice: retina or ports - one of those has to go if you want a slim and light mac, can't have both.
Score: 14 Votes (Like | Disagree)

Gold for home use.
Space gray for the office.

Someone would actually keep a Mac for 5 years?

Not everyone is loaded as you clearly are. I think the community has got your message - you've got buckets of money and can't wait to spend it on whatever you please. As evidenced by the ridiculous photo of cash strewn atop a Mac in your profile and your quote claiming that you think you're close to being a "god" because you're a plastic surgeon. Is there anything else you want to tell us?

As far as the MacBook. I believe this is a scenario where waiting for the second or third generation will make this an excellent product, but it currently is hard to reason the purchase for a lot of people. That said, I'm going to check this thing out in person on Friday and draw a better conclusion. Everyone should probably do that for themselves.
Score: 10 Votes (Like | Disagree)

Why is it so hard for people to understand that this MacBook caters to users who just browse the Internet and email themselves their documents?


If these are the people buying MacBooks, they could do the same with an iPad. Or even a 2010 MacBook. It's hard to understand because it's an obscene amount of money. Your very argument has validated that this machine is for light computer use only. You get more power, better battery life, and better value from a MacBook Air. You get much more power, more ports, better value, and a Retina display with the Retina MacBook Pro.

It's hard for people to understand because it's a difficult computer to understand. This feels more like an engineering excercise than the future of laptops. The MacBook Air was a vision of the future, albeit it too was insanely overpriced and underpowered when it was first announced. The MacBook just seems ... impractical. Removing Maglock to optimise thinness is to me an example of form over function.
Score: 9 Votes (Like | Disagree)

Any choice or variety beyond that gets them extremely riled up :)
Score: 8 Votes (Like | Disagree)

I suspect the reason there has been so much animosity towards this Macbook (a bit from me as well) is because they were hoping for a different product. Most people were hoping for a redesigned Macbook Air with a Retina display, but same class of CPU, same ports, same battery life.

Instead, Apple releases a dilemma - it's asking people to sacrifice ports and much more cash for a retina display, lower weight, and thinness. Plus, adding insult to injury, Apple has removed an very popular and well regarded feature - magsafe. To say nothing of the lower battery life rating. I don't blame people for being pissed at this dilemma.


This is exactly right. The Air is and has been a terrific ultraportable with only one serious drawback - a subpar screen. Instead of updating the air with a retina screen or even a 1080 ips screen, which would have made it an almost perfect ultraportable, they introduced a new line with its own flaws while not addressing the glaring flaw of the air line. So two flawed lines when they could've had one excellent one.
Score: 7 Votes (Like | Disagree)
Read All Comments