Job site Freelancer.com recently hosted a contest that called on designers to imagine what the rumored Apple Car might look like. We don't have any details on the car that Apple is said to be developing, so the designs submitted to the contest have no basis in reality. 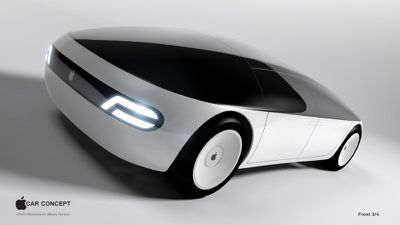 That said, it's a fun look at how different designers took Apple design aesthetics and applied them to imaginative, futuristic car renderings. The contest had 193 submissions, with the winning vehicle, from Aristomenis Tsirbas, featuring a flat design with smooth curves and sliding doors.

Many of the popular entries had similar futuristic designs and explored different car types from traditional sedans and sports cars to vans and trucks. This third-place Volkswagen Bug-style Apple Car from user Maximchernysh features purple accents, a wide frame, no side windows, and a generous number of Apple logos.

While all of the designs are fanciful, some of the renderings look like they came straight from a science fiction novel. This tiny shark-shaped Apple car from DearbornDesign rides low to the ground and has a front panel for entry.

The winning entry, which is the one at the top of the page, received a $1,500 prize from Freelancer.com for getting the most likes during the contest. All of the different car designs people imagined can be seen over at Freelancer.com's contest site.

We haven't heard much about the actual Apple Car in recent weeks as media attention is largely focused on the Apple Watch, but work on the car is still ongoing under the codename Project Titan at an unspecified location near Apple's Cupertino headquarters. We've learned little about the car, but we know that it may resemble a minivan and is being worked on by hundreds of employees.

ButteryScrollin
Let's remember all those cool apple watch mockups we used to get.
Score: 18 Votes (Like | Disagree)

applesith
Hahaha no way. This reminds me of pictures from the 80s of how 2005 would look.
Score: 12 Votes (Like | Disagree)

rkRusty
They all look ridiculous.
Score: 12 Votes (Like | Disagree)

ianKent
Magic Mouse on wheels is not what Apple is/will be spending years on.
Score: 8 Votes (Like | Disagree)
Read All Comments

Friday May 20, 2022 12:18 pm PDT by Juli Clover
Sony this week came out with an updated version of its popular over-ear noise canceling headphones, so we picked up a pair to compare them to the AirPods Max to see which headphones are better and whether it's worth buying the $400 WH-1000XM5 from Sony over Apple's $549 AirPods Max. Subscribe to the MacRumors YouTube channel for more videos. First of all, the AirPods Max win out when it comes ...
Read Full Article • 193 comments