We've known that AppleCare+ will be available for the Apple Watch since Apple's March 9 media event, but pricing for the extended support has thus far remained a mystery. A source has now shared some purported pricing information with MacRumors that may shed some light on the cost, suggesting AppleCare+ for each version of the watch will be priced differently.

While we can't verify the legitimacy of these claimed screenshots, other sources at Apple have indicated they are hearing unconfirmed word of similar pricing and 9to5Mac is reporting the same. 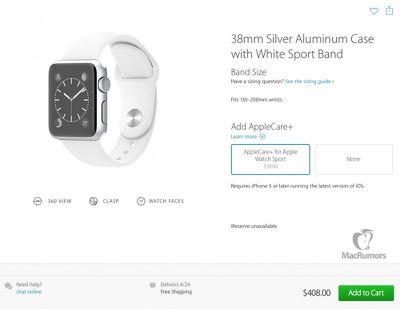 Apple Watch buyers will be able to purchase AppleCare+ as an add-on both online and in-store. With the iPhone, AppleCare+ can be purchased up to 60 days after an initial iPhone purchase, and it's likely Apple will adopt a similar policy with the Apple Watch.

The Apple Watch will be available for pre-order beginning on April 10, which is the same day that in-store try-on appointments will begin. The device will officially launch in the first wave of nine markets on April 24.

I thought it was going to be free for them. It is the least apple can do!
Score: 48 Votes (Like | Disagree)

Kinda funny how you make such a broad statement. I am buying one and I know quite a few people that are.


Unfortunately, many people are very egocentric. So if they don't buy/like something, they find it impossible for others to have other thoughts.
Score: 25 Votes (Like | Disagree)

Damn! I didn't expect the edition pricing to be that much.


It's okay. We're Apple, we'll get away with anything and people will keep paying us for it.
Score: 22 Votes (Like | Disagree)

iubuntu
to Quote Dave Ramsey
"People buy things they don't need with money they don't have to impress people they don't like."
Score: 14 Votes (Like | Disagree)
Read All Comments