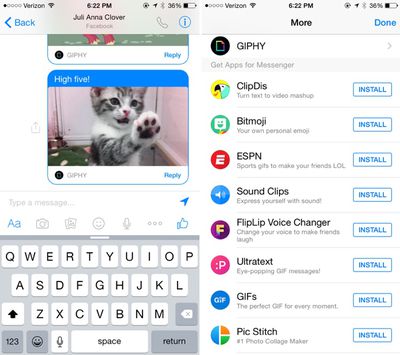 Apps can be accessed in the Facebook Messenger app for iOS when the "More" icon is tapped within a conversation. This opens up a list of available apps that can be installed, and when tapping install, you'll be taken to the app's install page in the iOS App Store.

In the Giphy app, you will see a list of all your Messenger friends, and once you tap to send a GIF to one of them, you will be returned to the Messenger app and your original Messenger conversation. From there, you can continue on the conversation, send additional GIFs, or send other content from other third-party apps. Content can be viewed in the Facebook desktop app, but sending it can only be done from an iOS device.


There are a wealth of third-party apps available in Facebook Messenger for iOS right now. Apps include GIF apps like Giphy, emoji apps, sticker apps, video apps, collage apps, and more. All of the apps are being released today in the iOS App Store and have been specially developed for use with the Facebook Messenger app.

While most of the apps have been developed by third parties, Facebook has released its own apps for Messenger, including Stickered, Selfied, and Shout. Third-party apps include ClipDis, Giphy, Bitmoji, ESPN, Camoji, Talking Tom, and Emu.

Facebook has faced some criticism for the way it's handled its iOS apps, most notably removing messages access from the main Facebook app and forcing users to download Facebook Messenger, but today's update with expanded content for the iOS app may change public opinion and could draw in users who have been reluctant to download the Messenger app for iOS.

Facebook Messenger for iOS can be downloaded from the App Store for free. [Direct Link]

bpeeps
As soon as Facebook forced you to download Messenger, I deleted the app from my phone. I use the web version and the overall site much less now.
Score: 38 Votes (Like | Disagree)

eskemo
I never downloaded the Messenger app in hopes they would reverse course. Now I am just happy checking messages from my computer. Probably makes me more productive actually! Thanks Facebook!
Score: 24 Votes (Like | Disagree)

Corrode
This looks so annoying.
Score: 16 Votes (Like | Disagree)

puma1552
Know what was better? When you didn't need a second damn app to read a message.

Why would any other developer buy into an app that's totally unecessary, widely hated by users and consistently receives 1 star ratings?

I just bookmarked facebook.com in Safari instead of installing messenger, which works perfectly well for reading and writing Facebook messages.

Probably because despite the almost purely principled hate that isn't really based on much, there are tons of people who actually have and use the app.
Score: 10 Votes (Like | Disagree)
Read All Comments