Rumors about a revamped Apple-branded Beats streaming music service have been circulating since September of last year, but as the launch of the service draws nearer, information on pricing and content has been leaking out.

In a detailed report on the upcoming service published today, The New York Times confirms some previously known information and adds new details on the roles Trent Reznor and Jimmy Iovine are playing in the development of the music service. The report also divulges some information on Apple's interest in exclusive album releases and the company's work on an iTunes Radio revamp.

Apple's upcoming streaming music service is said to take on many of the characteristics of the existing Beats Music service, with a focus on curated playlists and a "vivid visual appeal" that also fits into Apple's minimal design aesthetic. It's unlikely to retain the "Beats Music" moniker, and it is being tested as a part of an upcoming update to iOS, previously said to be iOS 8.4. 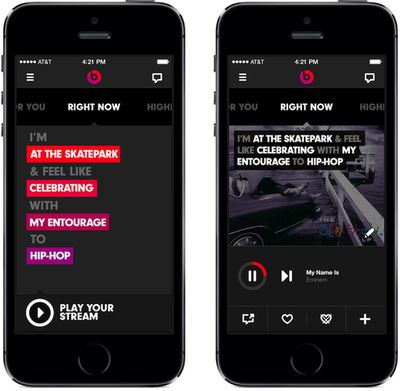 As previously rumored, while Apple hoped to price its new service at $7.99, undercutting the prices of competing services like Spotify and Rdio, it saw significant resistance from record companies. As a result, the service will likely be priced similarly to those other services, at $9.99 per month, but it will have no free tier.

Nine Inch Nails frontman Trent Reznor, who was the Chief Creative Officer at Beats before it was acquired by Apple, is "playing a major role" in the redesign of the music streaming app. Jimmy Iovine, Beats co-founder, is also said to be playing an important role furthering Apple's music ambitions.

Mr. Iovine has set the tone of the transformation of Apple's music plans, according to music executives. Mr. Iovine, who reports to Eddy Cue, Apple's head of software and Internet services, has been leading aggressive talks to secure prominent album releases that will be exclusive to Apple, akin to what Beyoncé did when she released her self-titled album on iTunes in December 2013. One music executive involved in the negotiations described this part of the new iTunes as "Spotify with Jimmy juice."

Along with a revamped music service, Apple is said to be planning to debut an enhanced version of iTunes Radio, which will be more tailored to listeners in regional markets and more like a traditional radio station. Recent hire Zane Lowe, a former BBC radio DJ has joined the iTunes Radio team as part of this effort.

Rumors have suggested that Apple's revamped music service will debut at this year's Worldwide Developers Conference, alongside a new streaming television service and a new Apple TV set-top box.

I was certainly on board with buying digital versions of my digital music lo this past decade, but now i realize how locked in I am to the ecosystem. I don't "own" this stuff! I seem to rent space from Apple to keep it, and if I decide to leave, then, it's back to 2006 for me, i suppose.

Now it's streaming, so the music you like will never be your own, for the current generation. How do you get attached to stuff? Who, of this generation will be able to say "I used to listen to Led Zep III back in college!" when really the music they hear will now be transitory.

I understand Streaming is nice and convenient and all, but it's the fast food of music.
Score: 9 Votes (Like | Disagree)

bigandtasty
how about a new version of iTunes as well... The current version is horrible.
Score: 8 Votes (Like | Disagree)

ttss6
For a free trial, you get a U2 playlist preinstalled!
Score: 8 Votes (Like | Disagree)

Surely they're not planning on keeping iTunes Radio and Beats as separate services?


That's my question. As an iTunes Match customer, I was looking forward to using iTunes Radio, but it STILL has not come to Canada, and now likely won't. Instead, I'll need to pay $12 a month (CAD) for a streaming music-only service. No thanks.

All I have to say is that this Beats thing better be GOOD and UNIQUE rather than some also-ran streaming music service.
Score: 5 Votes (Like | Disagree)

samcraig
Nothing about this excites me
Score: 4 Votes (Like | Disagree)