Apple has removed the award-winning healthy eating app The Whole Pantry from the App Store and its featured Apple Watch apps page amid allegations that its creator Belle Gibson committed fraud, according to The Sydney Morning Herald. The report states that Gibson is accused of making false claims about her cancer diagnosis and failing to donate thousands of dollars collected during fundraisers to charities. 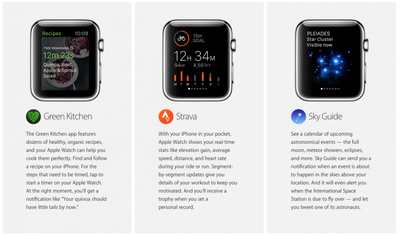 Apple has removed The Whole Pantry from its Apple Watch featured apps page
Apple had been promoting The Whole Pantry as a featured Apple Watch app on its website over the past week, although it has updated the page today to remove the listing. The app also appears to have been pulled from the App Store worldwide, based on spot checks of the United States, Australia, Canada and United Kingdom storefronts. The company has yet to comment on the matter.

The Whole Pantry was featured on the Apple Watch apps page earlier this week
Gibson is a 26-year-old from Melbourne that rose to fame for healing herself from terminal brain cancer without conventional treatment, although the report claims that she later admitted to possibly being misdiagnosed. She has since been the subject of intense scrutiny from her supporters and those that donated to her cause, and has disabled the Facebook page for The Whole Pantry and her personal Instagram account.

Note: Due to the social issues regarding this topic, the discussion thread is located in our Politics, Religion, Social Issues forum. All forum members and site visitors are welcome to read and follow the thread, but posting is limited to forum members with at least 100 posts.

What has the healthy eating app got to do with other aspects of her life?

In the linked article:'She built her empire off the story of healing herself from terminal brain cancer without conventional treatment'

What has the healthy eating app got to do with other aspects of her life?


It would be kind of like Apple allowing an investment advice app from Bernie Madoff to stay in the App Store.
Score: 8 Votes (Like | Disagree)

...Gibson is a 26-year-old from Melbourne that rose to fame for healing herself from terminal brain cancer without conventional treatment


That should be everything you need to know about Gibson to understand what she is about.

It's a classic con, to offer the promise of something people want to believe so much that they're able to ignore that it doesn't make any sense.

Apple probably should have vetted this app better before featuring it, but I suppose they caught it before it really had a chance to be a problem.
Score: 8 Votes (Like | Disagree)

Why is this article considered political in nature?

Also, limited to 100 posts? I want to see comments on an article limited to those with 500 posts. Any way...

It is not exactly political, but it is a controversial social issue that we feel is best suited for this forum.

I have updated our disclaimer at the bottom of the article to better reflect this. Thanks.
Score: 7 Votes (Like | Disagree)

It appears Apple is acting on the basis of their private property walled garden to simply delete an app that brings shame on Apple.

This is interesting and a bit disturbing because it appears the journey this woman went through was not so much fraud as a changing set of circumstances caused by an initial mis-diagnosis, a series of treatments including holistic, and getting a later diagnosis of being clear. This is merely a case of mixed causation.

As for the donations, it appears that when she files her tax return this year and lists her donations, and her amended return from last year, she could correct that aspect of the case with the stroke of a pen. Literally. Boom. Case not fraudulent. Then she could be reinstated on the Apple Ap store.

While it does not surprise me Apple didn't wait for due process to respond, it also shows one of the weaknesses of a walled garden. The law and justice does not matter. PR does.

Post like this are saddening. Defending a lying deceptive woman and making Apple the bad guy. MR is no longer the Apple Enthusiast board it once was.
Score: 6 Votes (Like | Disagree)
Read All Comments

Monday August 2, 2021 2:12 am PDT by Sami Fathi
For future iPhones, iPads, and MacBooks, Apple plans to use smaller internal components in an effort to increase the size of the device's battery, according to DigiTimes. Image Credit: iFixit Specifically, Apple plans to "significantly increase the adoption" of IPDs or integrated passive devices for the peripheral chips in its products. These news chips will be slimmer in size and allow for...
Read Full Article • 65 comments