First announced back in January as an interstellar continuation of Civilization: Beyond Earth, Firaxis' Sid Meier's Starships today launches for iPad, PC, and Mac (via iMore).

Developed by Firaxis in conjunction with 2K Games and Meier himself, Starships places players at the helm of a fleet of starships and tasks them with building a thriving interplanetary federation. 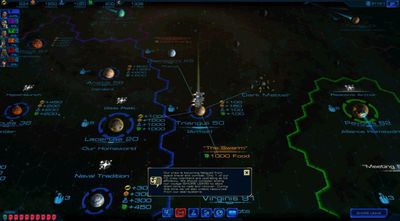 Image via GameSpot
Players will gather new technology, discover new planets, and wage wars in missions that will randomly generate combat, offering a degree of replayability to the main story thread. Though still unclear, Civilization: Beyond Earth and Starships will also offer some form of connectivity between the two games, as well.


Set in the universe of Civilization: Beyond Earth after the age of the Seeding, Sid Meier’s Starships offers sci-fi/strategy fans a full stand-alone game experience that also features cross-connectivity with Beyond Earth, expanding the depth of both games. See if you have what it takes to rule the universe!

• Tactical Space Combat: Encounter unique tactical challenges in every mission, with dynamically generated maps, victory conditions, and foes.
• Fully Customizable Starships: Create an armada that fits your tactical plan with modular spaceship design.
• Diplomacy, Strategy, and Exploration: Expand the influence of your Federation and gain the trust of the citizens of new planets. Use the unique abilities of the each planet to enhance your fleet and Federation, and keep your opponents in check. Build improvements on worlds to increase the capabilities and resources of your Federation.
• A Galaxy Of Adventure: Explore the galaxy as you lead your fleet to distant worlds and complete missions to help the citizens of these planets. Fight pirates, protect colony ships, destroy rogue AI, and more.
• Multiple Paths To Victory: Will you win by conquering the greatest threat to the galaxy? Or will you unite a plurality of worlds in your Federation? Perhaps you will lead your people to push the frontiers of science. Each choice you make carries consequences on your path to victory

A few early reviews have praised the game for offering the complexities of the Civilization series without the huge time commitment, though simultaneously noting hardcore fans may have issue with the shorter, more "bite-sized" gameplay.

The iPad App Store version of Sid Meier's Starships [Direct Link] is out now, but the PC and Mac editions on Steam can currently only be pre-purchased, with a three hour countdown marking the game's release as of writing. The game is available for $14.99 on all platforms.

cdsfire
Starships were meant to fly

Starships were meant to fly
Hands up and touch the sky
Cant stop cause were so high
Lets do this one more time
Score: 7 Votes (Like | Disagree)

Yea, any iOS app priced above $5 for me needs a lot of reviews....amazing reviews.

And this is what is ruining mobile gaming
Score: 5 Votes (Like | Disagree)

Obviously my numbers are anecdotal, but in the last 3 years I've spent easily over $100 on apps for my iPhone and none of them cost more than $10. If each of those same apps cost over $10 each, I don't think I would have bought more than 5 of them.

At current iOS app prices, I can afford to buy stuff on a whim. It's like the impulse aisle at the supermarket.


The problem is, that sometimes it turns out that it costs 1/10 as much and 3x as many people buy it.

I don't actually think it's ruining games, but changing it.

The old dominant model was that you went through a publisher: they had access to the retail outlets (which had access to the end-users), money needed to develop the game, the money and relationships to market a game.

With publishers as gatekeepers, there were a lot fewer games on the market. And with publisher money the games could be bigger, with higher production values, more sophisticated design, larger scope. The trend was for publishers to compete on the basis of this, leading to fewer, larger, more sophisticated, more expensive games. However, publishers exerted a lot of control over the development process and tended to be pretty conservative since they were risking all the money. This really constrained creativity and variety. There were great games made, but not a lot of them.

With the gatekeeper out of the way there were a lot more game and a much greater variety of them. Naturally this increases the pressure to compete on price. It also takes the up-front money from the publisher out of a lot of games, meaning they are forced to be smaller, less sophisticated, etc.

I think that leaves us with:

- some are pumping out low quality games as fast as they can, and compete mostly on price. There's no gatekeeper supplying the money who is filtering these out. This leads cheap (free+ads or free+iap) low quality games and a lot of them. These are the ones that are ruining things.

However, I think we also have:
- a number of games that are between tiny and medium-sized of incredible creativity, quality, and variety that are, nevertheless, quite cheap... (whether it's $1-$5 or ad-supported or iap-supported or whatever).
This the the part of gaming that is getting better, the kind of games that could not have existed in large numbers in the publisher dominated model.

And there are still AAA titles coming out.

In the end I think we're experiencing a golden age of gaming where there are lots of very creative, high-quality games being created across a wide range of prices and sizes. And we're also seeing a massive tide of crappy games being released that you end up wading through to try to find the good ones.

It's definitely not all bad, but things have changed.
Score: 2 Votes (Like | Disagree)

kage207
Yea, any iOS app priced above $5 for me needs a lot of reviews....amazing reviews.
Score: 2 Votes (Like | Disagree)
Read All Comments