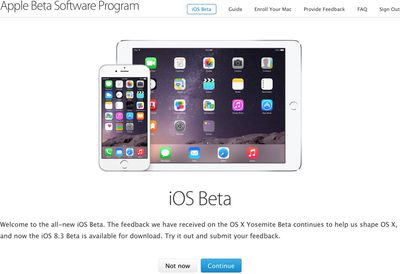 The launch of today's iOS beta testing program has also been accompanied by an overhaul to Apple's Appleseed Beta testing site. Previously the language on the site was heavily focused on OS X, but a site revamp gives it a more general focus to encompass both iOS and OS X testing.

iOS 8.3 was first seeded to developers on February 9, while iOS 8.2 was still in testing. iOS 8.2 is mainly focused on the Apple Watch, but thus far, iOS 8.3 has introduced several new features including support for wireless CarPlay connectivity, a new emoji picker, support for Google 2-step verification, and Apple Pay support for the China UnionPay network.

Update: Apple is now sending out emails to certain members of the OS X public beta program, inviting them to also test out iOS 8.3.

Thank you for participating in the OS X Beta Program. For the first time ever, we are broadening the program to include the all-new iOS Beta. The feedback you have provided on the OS X Yosemite Beta continues to help us shape OS X, and we would like to offer you an invitation to the iOS 8.3 Beta.

The iOS 8.3 Beta is available for download from the new Apple Beta Software Program website. Try it out and submit your feedback. You can use the iOS 8.3 Beta while continuing to use the OS X Yosemite 10.10.3 Beta. And with the all-new Photos app for Mac and iCloud Photo Library, you can now access your entire library on all your devices.

Luckily, better reliability may be a result of more beta testers. But I won't be one of them.
Score: 24 Votes (Like | Disagree)

You're answering for everyone? How sweet.

applemax
Where's the link? There's no button on the Beta Program page for me.
Score: 7 Votes (Like | Disagree)

iPhone20
I signed up for OS X testing but i'm not seeing the beta. Where do we have to sign up?
Score: 7 Votes (Like | Disagree)

ZeChild
Getting sick of the fact that I've been registered for the Yosemite beta since the day it launched and I've still got no option to join the iOS beta program, yet people who only registered to the program yesterday are getting access WTF Apple ?!?:mad::mad::mad:
Score: 6 Votes (Like | Disagree)

unplugme71
seems like everyone who got theirs isn't updating, and everyone who wants to still didn't get an invite.