BlackBerry today filed a second lawsuit against Typo Products, the startup backed by Ryan Seacrest, alleging that the second-generation Typo keyboard continues to infringe upon its intellectual property, reports The Hollywood Reporter. In a complaint lodged in a California federal court on Monday, BlackBerry claimed Typo "slavishly copied" its keyboards down to the "smallest detail."

Typo Products first clashed with BlackBerry shortly after the former debuted its first-generation Typo iPhone keyboard case in late 2013. Backed by media personality Ryan Seacrest, the product was the result of a desire to create a physical keyboard for the iPhone after he and his partner Lauren Hallier saw many of their friends carrying two phones -- one for typing and correspondence, presumably a BlackBerry, and an iPhone for everything else. 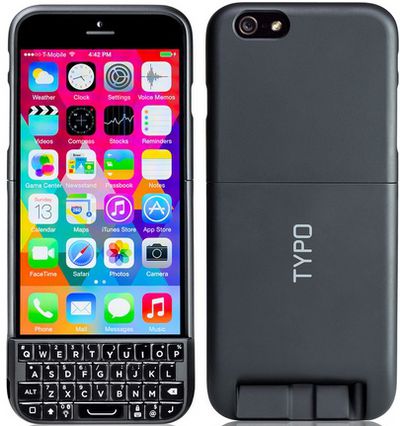 The Typo2 for the iPhone 6
The snap-on iPhone keyboard that Seacrest and Hallier developed looked very similar to a BlackBerry keyboard, which BlackBerry took offense to. BlackBerry sued and won an injunction against Typo Products, leading Typo to produce the Typo2, a second-generation keyboard that it claimed did not violate any BlackBerry patents.

The $99 Typo2 features a sleeker design with a built-in keyboard that unfortunately blocks the Touch ID fingerprint sensor on the iPhone 6. Though Typo Products claims that its second-generation offering does not infringe on BlackBerry patents, it continues to bear a visual resemblance to the keyboards BlackBerry has used in its products for years.

According to BlackBerry, with the Typo2, Typo Products produced a "minimally modified derivative version" of the original Typo keyboard that continues to abuse BlackBerry's trade dress. The lawsuit cites a range of media reviews that compare the Typo2 to the BlackBerry, pointing out the marked similarities between the two, including a comment from one of our own forum members. BlackBerry's lawsuit also accuses the Typo2 of infringing on five BlackBerry patents.

BlackBerry now has two lawsuits pending against Typo, for the original Typo keyboard and the Typo2. BlackBerry has also won an award of $860,000 after Typo continued selling its original keyboard in violation of the previously mentioned injunction. In the newest lawsuit, BlackBerry asks for "enhanced and exemplary" damages for Typo's continued infringement.

joelisfar
Great move Blackberry! I bet this lawsuit will go down as the thing that sparked their big comeback!
Score: 50 Votes (Like | Disagree)

I HATE patents. End them. End them ALL.


If you would understand the true purpose of a patent, or had at any time in your life invested money and time to develop a product and bring it to market, then you wouldn't have made such a dumb comment.
Score: 40 Votes (Like | Disagree)

macintologist
Why anybody would buy a Blackberry, let alone a Blackberry keyboard for your iPhone, is beyond me.
Score: 37 Votes (Like | Disagree)

I HATE patents. End them. End them ALL.


Sure, that will encourage companies and inventors to invest their time and money into R&D. /s :rolleyes:
Score: 35 Votes (Like | Disagree)

Looks like they're only trying to protect their IP, though I'm not sure legally what chance they actually have.

They should still go for it as it's their intellectual property. Just because there's the chance they might lose in court doesn't mean they shouldn't defend what's rightfully theirs. Unlike some other companies, BlackBerry is still actually using its patents in current products ever since the original "BlueBerry" models.
Score: 15 Votes (Like | Disagree)
Read All Comments

Friday May 20, 2022 6:50 am PDT by Joe Rossignol
Earlier this week, The Information's Wayne Ma outlined struggles that Apple has faced during the development of its long-rumored AR/VR headset. Now, in a follow-up report, he has shared several additional details about the wearable device. Apple headset render created by Ian Zelbo based on The Information reporting For starters, one of the headset's marquee features is said to be lifelike...
Read Full Article • 155 comments

Friday May 20, 2022 12:18 pm PDT by Juli Clover
Sony this week came out with an updated version of its popular over-ear noise canceling headphones, so we picked up a pair to compare them to the AirPods Max to see which headphones are better and whether it's worth buying the $400 WH-1000XM5 from Sony over Apple's $549 AirPods Max. Subscribe to the MacRumors YouTube channel for more videos. First of all, the AirPods Max win out when it comes ...
Read Full Article • 180 comments