Apple's new spaceship-shaped Apple Campus 2 is under construction, and the company gave KQED News a tour of the site, providing them with new details and a ground-based look at its progress.

As previously revealed, the building has an environmentally-conscious design, with features like using recycled water to flush toilets and solar arrays to power its functions. Keeping with this theme, the building also uses recycled parts from older buildings. 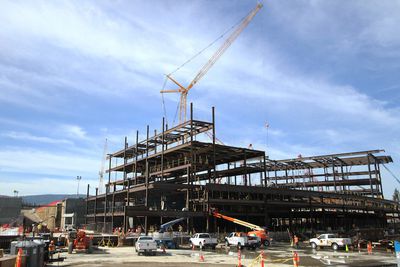 “What Apple inherited on the property was several older buildings, all of which were broken down and deconstructed,” says KQED Science reporter Amy Standen, who got a tour of the site. “Much of the material from those old buildings was recycled into new building material to make the new campus, according to Apple.”

Previously, most of the looks at the progress of Campus 2 have been taken from drones in the air. However, these new ground-based photos offer a new perspective on the building's height and scale.  The above photo offers a look at the framework of the main building, allowing one to gauge how tall the building could be.

Progress on what KQED identifies as Apple's new amphitheater, below, can also be seen, though it's difficult to visually tell how large the amphitheater will be. Apple will likely use this space for its town hall meetings.

Photo of Apple's new amphitheater, via KQED News.
The latest air-based update on the construction came from YouTube user myithz just over a week ago. However, it's fairly difficult to locate some of the locations in KQED's photos in the video, potentially signaling that a good amount of progress has been made since it was recorded.
Though construction has steadily continued through the last half of 2014 and into 2015, Apple's Campus 2 obviously has a long way to go until completion. Other than the main circular structure, main theater, fitness center and parking garages, Apple submitted plans for new offices, testing facilities and more parking garages in October for the second phase of construction. The complete campus is expected to be finished by the end of 2016.

Additional photos and information can be seen on KQED News' website.

If only I could've gotten paid millions for designing this giant doughnut. :rolleyes:


I bet you can't even make a doughnut...let alone design that building.
Score: 22 Votes (Like | Disagree)

definitive
upvote if you care about progression of this thing being built!
Score: 11 Votes (Like | Disagree)

I bet you can't even make a doughnut...let alone design that building.


'Twas a joke. Take seriously little of what I say.
Score: 4 Votes (Like | Disagree)

Guys, it's just an construction side. :rolleyes:
99% of us will never get access to it once it is finish.

And you do realize that you can drive right onto Apple's current campus right now? You can walk into the employee campus store, and right into the front door of the main building. Just sayin'
Score: 3 Votes (Like | Disagree)

AngerDanger
I'm getting a vaguely Millennium Falcon-ish vibe from this. Wait—Apple and Disney are tight due to the latter's Pixar acquisition, and Disney now owns the rights to Star Wars…
Score: 3 Votes (Like | Disagree)

jonblatho
If only I could've gotten paid millions for designing this giant doughnut. :rolleyes:
Score: 3 Votes (Like | Disagree)
Read All Comments