Sprint and T-Mobile Make Improvements in 2014, but Continue to Trail Verizon and AT&T in Performance 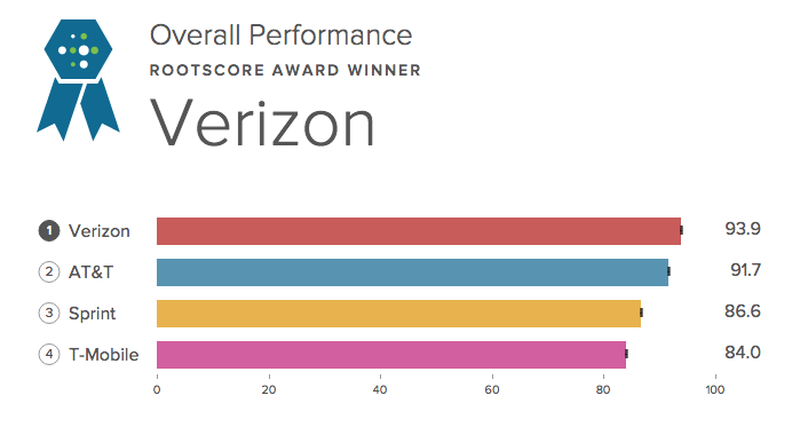 The new data reveals Sprint closed out the second half of 2014 on a high note with significant improvements in network speed, reliability and call performance. While it continues to trail market leaders Verizon and AT&T, Sprint's network enhancements were enough for it to surpass T-Mobile in the United States and on a state-by-state level during the final six months of the year.

While the network still trails the leaders in every category, Sprint made tremendous strides—particularly in reliability—in the second half of the year. In fact, Sprint improved its tally of reliability index wins by 25 (all shared) compared to what we saw in the first half. Also consider that in the first half of 2014, Sprint recorded a download success rate below 97% in 108 out of the 125 markets that we tested; in this round of testing, that market count had dropped down to 52.

Despite ranking last in the United States and on a state-by-state level, T-Mobile continued to make improvements in large metro areas, with fewer dropped calls, blocked calls and failed downloads. RootMetrics predicts T-Mobile could place even more pressure on leading carriers Verizon and AT&T if it continues to make improvements in these regions, such as New York City, Chicago, Washington D.C., Philadelphia, Houston, Seattle and Las Vegas.

Overall, Verizon and AT&T continue to offer the best network coverage and reliability nationwide, but T-Mobile and Sprint are stepping up the competition with continued improvements. The full RootMetrics report provides a comprehensive look at all four major carriers in the United States.

nouveau-apple
Go go T-Mobile you can do it!
Score: 3 Votes (Like | Disagree)

avanpelt
T-Mobile ranks worse than Sprint (at least in this benchmark)? That's saying something. Legere is a charismatic guy who has some good ideas, no question about that. But his company still has a ton of work to get done and the other carriers aren't sitting still.

Just for giggles, I went to the T-Mobile site just to take another look at their LTE coverage in my region to see if it's gotten any better. Nope. I live in Metro Atlanta; and as long as I stay within 50 miles of home, I'd pretty much always have LTE coverage with T-Mo.

Put simply, T-Mobile's LTE coverage map in my region looks like a Verizon or AT&T coverage map from 1995 (i.e. you're covered near bigger cities but beyond that, forget it). According to T-Mobile's own map, more than half the state of Georgia outside of Metro Atlanta has 2G coverage on T-Mobile. Yeah.

T-Mobile might have attractive pricing; but I'd rather pay a price premium with Verizon and have LTE 99% of the time regardless of where I go as opposed to saving $20 or $30 bucks a month for "unlimited" data on T-Mobile only to have my phone drop to 2G when I have to drive outside of a metro area. Unlimited 2G data is not even worth $20 a month, in my opinion.
Score: 2 Votes (Like | Disagree)

J. Jizzle
WHAT!? Sprint is actually beating T-Mobile in Overall Performance & Reliability??? I thought Sprint would be dead last in every category. I'm actually shocked about this.
Score: 2 Votes (Like | Disagree)

CEmajr
They are getting closer and closer.

Looks like Sprint improved in call reliability a lot but data speeds remain their achilles' heel. T-Mobile has the great data speeds but of course needs to finish addressing their rural data coverage issues.
Score: 2 Votes (Like | Disagree)

ATT is Awful, almost never works when I really need it to. I only get LTE about 10 or 15% of the time in the North East and usually only 2 bars and it's extremely rare that I get LTE when I'm outside of my region. I really would like to know where people live where the service is so great. I've had it for 8 yrs strictly because they at least get the bill correct every month - which is something Verizon never did (not only was Verizon awful, but they screwed me on my bill to the tune of hundreds of dollars nearly every few months). :confused:
Score: 1 Votes (Like | Disagree)

Huh. When I checked last year I had found charts showing AT&T edging out Verizon.


Not sure what charts you were looking at. Verizon has always been in 1st place overall since they started doing the nationwide comparisons. Due to their rural coverage they win almost every state.
Score: 1 Votes (Like | Disagree)
Read All Comments

Thursday May 28, 2020 8:13 am PDT by Eric Slivka
With the release of macOS Catalina 10.15.5 and related security updates for macOS Mojave and High Sierra earlier this week, Apple is making it more difficult for users to ignore available software updates and remain on their current operating system versions. Included in the release notes for macOS Catalina 10.15.5 is the following:- Major new releases of macOS are no longer hidden when...
Read Full Article • 299 comments