SwiftKey is one of the most popular third-party keyboard options on iOS, and today it received a major update adding a highly requested feature -- emoji. Emoji can be accessed by tapping on the smiley at the bottom of the keyboard, and there's also a new predictive emoji tool that learns the most frequently used emoji and suggests them while typing. 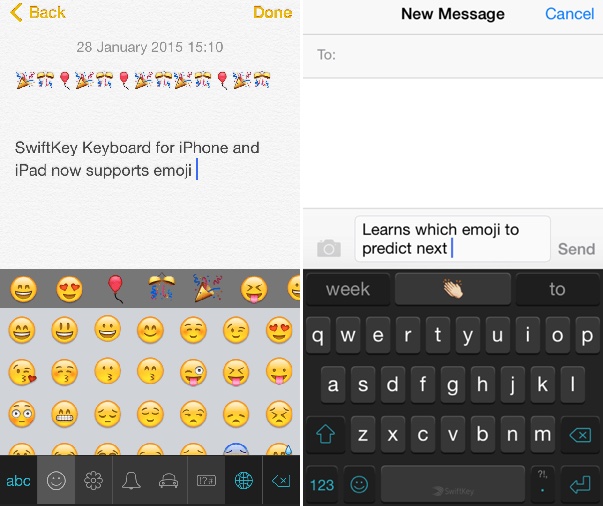 We've built emoji right into SwiftKey Keyboard so you can now express yourself when words don't quite cut it. Just as it learns the words and phrases that matter to you, SwiftKey also learns and predicts which emoji you use most often so you can spend less time looking for that perfect smiley (or slice of pizza -- whatever you're into).

Using a lot of emoji in text will cause emoji to pop up more frequently in the word prediction box, making it easier to insert fun characters into text.

Today's update also includes SwiftKey Flow for the iPad, a feature that was previously limited to the iPhone. With SwiftKey Flow, it's possible to type faster via swiping on the screen. Finally, there are also 11 new languages available in SwiftKey, including Bulgarian, Croatian, Greek, Hinglish, Icelandic, Indonesian, Latvian, Russian, Serbian, Slovak, and Turkish.

SwiftKey Keyboard for iOS can be downloaded from the App Store for free. [Direct Link]

CrAkD
I'm all done with 3rd party keyboards until apple fixes the implementation. I want to smash my 6+ in s million pieces everytime I need to type something and the keyboard doesn't pop out.
Rating: 6 Votes

Traverse
I'ved tried several third party keyboards (my favorite being Flesky), but I always end up back with the default Apple keyboard. 3rd party implementation is still buggy, still poses a privacy concern (albeit mild), and I've honestly never had an issues using the stock keyboard.
Rating: 5 Votes

avanpelt
Apple's implementation of third-party keyboard support has been sloppy, at best.

It's almost like Apple is being passive-aggressive with their users:

Of course, we didn't get what we wanted. I'm cautiously optimistic that iOS 9 will fix the third-party keyboard issues and finally let us modify which apps are the defaults for certain tasks. We'll see...
Rating: 2 Votes

Jessica Lares
I am enjoying the emoji bar I have in Nintype. Yes, it is crazy complicated to setup, but once you do it, it's a blast to use. I have one bar for numbers, then one bar for my favorite emoji, then another for markdown shortcuts. I'm also using the globe button to automatically insert the date, and have some other shortcuts within the shift key. I moved a lot of my TextExpander shortcuts to be within the letters too. There is a specific bit that you can write so it moves to the next line in a shortcut, but I haven't messed with that yet.

Needless to say, it replaced the majority of the keyboards I was interested in using.

I wish it had iCloud syncing and had a library of little pictures to represent shortcuts though. But that's not really an issue in general.

I have used SwiftKey on Android. I wish the iOS version was more like it. That's why I ended up deleting it when it first came out.
Rating: 1 Votes

Would prefer SwiftKey over Swype, but SwiftKey doesn't automatically place a space after a comma or period. Heaven knows why not ...


Are you sure it is not in the settings? For android phones it is in the swiftkey settings.
Rating: 1 Votes

xraydoc
I was a big fan of SwiftKey on Android. Very glad it's steadily improved on iOS.

It previously wasn't quite ready for full-time use (missed key click sound, failed to pop up some times, etc.) but I'm giving it another go with this new update.

Spent about 15 minutes with it composing some emails and entering URLs and so far it's been performing quite well.

I did attempt to enter a iTunes store review on it, but the form is coming up blank with this keyboard selected (haven't yet tried it with stock). This, however, I'm blaming on an iOS bug and not a SwiftKey bug.

What I'd like to have with SwiftKey, though I don't know if iOS exposes an API for it, is haptic feedback instead of audible key click.


I think I read Apple is restricting this unfortunately.
Rating: 1 Votes

It costs money, I know and it's a bit more complicated, but such a joy to type/swipe with both thumbs once you get the hang of it.

It has become my default keyboard.
Rating: 1 Votes