Universal Pictures will release the long-anticipated Steve Jobs movie on October 9, according to CNBC. The upcoming biopic, based on Walter Isaacson's official biography of the late Apple co-founder, is directed by Danny Boyle and stars Michael Fassbender as Steve Jobs and Seth Rogen as Steve Wozniak. Universal took over the film in November. 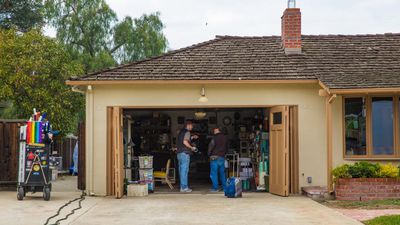 The filming of the movie began last month in the garage of Steve Jobs' childhood home, and will reportedly also take place at two auditoriums and a restaurant in the area. The movie will be focused upon three main scenes, including the unveiling of the NeXT computer, the debut of the original Mac, and the introduction of the iPod.

Steve Jobs co-founded Apple alongside Steve Wozniak and Ronald Wayne in 1976, remaining with the company until the board of directors ousted him in favor of then-CEO John Sculley in 1985. Jobs founded NeXT Computer the same year and would end up back with Apple in 1997 when the Cupertino-based company acquired NeXT for $427 million. Jobs then led Apple to become the world's largest tech company, overseeing the launch of the iPod, iPhone and iPad. Jobs passed away in late 2011 after a lengthy battle with pancreatic cancer.
Related Forum: Apple, Inc and Tech Industry
25 comments

Is there enough time between now and October to complete all the special effects and other post-production work?

I hope they get the car chases right.
Score: 7 Votes (Like | Disagree)

keysofanxiety
I hope they portray the spiteful/crazed nature of Jobs. Wyle really nailed it in Pirates of Silicon Valley. But that film was made when Apple was struggling and hadn't yet found its feet. They didn't paint Jobs as being a deified visionary because they didn't know just how amazing Apple's growth would become. There wasn't any element of hindsight.

With these films being made after Jobs' death, and with Apple enjoying the success it currently is, my fear is that'll seep into the film  coming across as a glorification, rather than an honest portrayal. I guess it's difficult to avoid, and that's why I think PoSV will remain the best film for people who want to see a film about Apple's roots.
Score: 5 Votes (Like | Disagree)

Since this is around the time that the new iPhone gets released, maybe the will give away tickets to the movie with each phone purchased. :D

Certainly not the other way around.


Or Apple will simply announce that the movie has been added to everyone's iTunes library for free  whether we want it or not. :D
Score: 4 Votes (Like | Disagree)

aka777
Pirates of Silicon Valley is the classic..
Score: 3 Votes (Like | Disagree)

MH01
Excellent, the daily updates on the making of theis movie have an end date ;)
Score: 2 Votes (Like | Disagree)

The third product in this movie is the iMac, not the iPod. This has been clarified by the studio. Not sure why MacRumors is still reporting the old iPod rumor.


That make sense. I think the original iMac is one of the first products Apple released after Jobs return. It was a huge hit and put Apple back in the minds of consumers. It also foreshadowed the new Apple, the one led by Jobs until his death.
Score: 1 Votes (Like | Disagree)
Read All Comments