U.S. iPhone Sales Overtake Android Sales by Slim Margin in Q4 2014 with iPhone 6 and 6 Plus Launch

For the first time since 2012, sales of Apple's iPhone overtook sales of Android devices by a slight margin during the October to December 2014 period in the United States, according to the latest figures from Kantar Worldpanel (via TechCrunch). Apple's iPhone took a 47.7% sales share of the U.S. smartphone market while Android accounted for 47.6%, with Windows Phone accounting for 3.8% of sales. 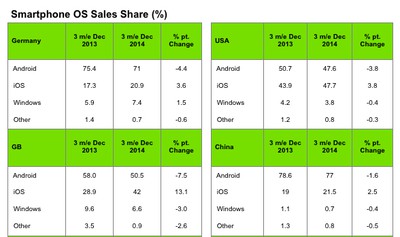 In the US, Apple iOS overtook Android for the first time since this time in 2012, albeit by the slimmest 0.1% margin," reported Carolina Milanesi, chief of research at Kantar Worldpanel ComTech. “While the success of the iPhone 6 and 6Plus is unprecedented, this quarter’s performance also points to Apple having its strongest portfolio ever. With a range of devices available at different price points in both contract and pre-pay Apple was able to take advantage of a weaker Android offering at the premium end of the market.

Kantar also notes that the iPhone 6 was the best selling smartphone in the United States, and that the iPhone's market share rose 6.2% in Europe during the holiday quarter. By comparison, Android's share declined 3.8% overall in Europe, as Italy was the only country to experience market share growth. In China, Apple grew 2.2% to claim a 21.5% market share, with the growth attributed to the launch of the iPhone 6 and iPhone 6 Plus.

newagemac
That's absolutely crazy numbers for a single manufacturer compared to everybody else combined. I guess when you make great products and back it up with awesome support, people will keep coming back. No matter what all the trolls on this forum try and say. You'll see them posting below doing damage control, just laugh and move on...
Score: 24 Votes (Like | Disagree)

And Steve Jobs said that 3.5" was the perfect screen size :rolleyes:

I see no evidence that he was wrong.

That there is a strong market for stupid-big screens is not evidence that such screens are better than 3.5" screens -- just as the popularity of 48 oz. Coke Big Gulps at 7/11 is not evidence that 8 and 12 oz. servings of Coca Cola are too small.
Score: 6 Votes (Like | Disagree)

Macist
It's almost as if people were just waiting to buy the bigger iPhones Apple said they didn't want.
Score: 5 Votes (Like | Disagree)

OllyW
That a big leap for the iPhone in the UK.
Score: 5 Votes (Like | Disagree)
Read All Comments