Patent holding company TriDim Innovations this week filed a patent infringement lawsuit against Apple, accusing the companying of violating two 3D workspace patents the company owns. The lawsuit was filed in the U.S. District Court for the Northern District of California with a judge assignment still pending.

TriDim asserts in the suit that Apple is infringing on U.S. patents 5,838,326 and 5,847,709, both of which address document management in 3D workspaces. Specifically, Apple Time Machine, Cover Flow, and Safari for iOS 7 and 8 are claimed to be infringing on the patents. 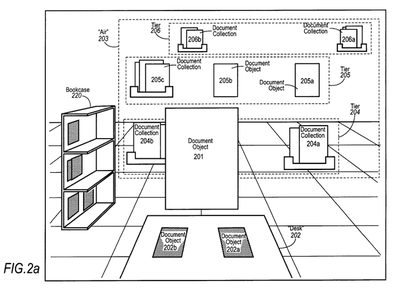 One embodiment of the document display space disclosed in TriDim's patents
Both of TriDim's patents were originally filed in 1996 and awarded to Xerox in late 1998, although they have changed hands several times in recent years. Patent ’326 details a method of moving and manipulating document objects in a 3D workspace using touch-drop, flick and other gestures.

A computer controlled display system for displaying a three-dimensional document workspace is disclosed. One or more documents objects are present in the document workspace. The present invention provides for interaction with the collections, e.g. viewing, moving and storing, while balancing the necessary tradeoffs of rapid access, number of collections and associated documents, and available screen space.

TriDim is asking for unspecified monetary damages for Apple’s alleged infringement, along with interest and court costs.


TriDim's lawsuit is not the first time Apple has been accused of patent infringement for its Time Machine and Cover Flow interfaces. In 2010, Apple was initially hit with a $625 million judgment in a case centered on a different set of patents owned by Mirror Worlds LLC. That verdict was ultimately overturned, however, and became final when the U.S. Supreme Court declined to hear the case.
Tags: Apple Lawsuits, Patent
[ 66 comments ]

ArtOfWarfare
So here's the big question: if Apple has been causing this company so much harm to warrant going to court, why is it only now, 7 years after Time Machine and even more after Cover Flow, that they're choosing to do anything about it?
Score: 15 Votes (Like | Disagree)

Oh, that's right, patent trolls don't sue other patent trolls, that would be unethical/unprofessional. Oh yeah, and neither of them have Apple's deep pockets or actual products that incorporate the patents.
Score: 14 Votes (Like | Disagree)

So here's the big question: if Apple has been causing this company so much harm to warrant going to court, why is it only now, 7 years after Time Machine and even more after Cover Flow, that they're choosing to do anything about it?


Because next year everything will be flat design and they won't get a penny.
Score: 11 Votes (Like | Disagree)

So here's the big question: if Apple has been causing this company so much harm to warrant going to court, why is it only now, 7 years after Time Machine and even more after Cover Flow, that they're choosing to do anything about it?


Patents filed after 1995 expire 20 years from filing date. These two patents expire in 2016. So if they think they've got something the clock is about to run out.
Score: 6 Votes (Like | Disagree)

Cyber86
Thank goodness they only patented air behind bookcases, and not in front of it.
Score: 5 Votes (Like | Disagree)
Read All Comments