Apple Raises Product and Developer Program Prices in Some Countries

With the new year, Apple has made a few price adjustments to its products and services, led by an increased yearly fee for the company's developer programs in a number of European countries, as first noticed by German blog Apfelpage [Google Translate].

The Apple-focused blog reports that German developers are now facing a €99 ($119) per year subscription charge for Apple's various developer programs, up from a previous €80 ($96) subscription fee. The price changes presumably affect all EU markets, as Apple typically has consistent pricing across member countries except for occasional differences due to variations in tax rates. Apple's developer programs are priced at $99 per year in the United States. 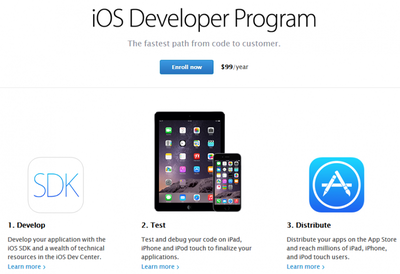 The price increase is also in effect for the UK, where the price has been adjusted from £60 ($92) a year to £79 ($121) as noted by 9to5Mac. Across the board, the European developer program has been about on par with or slightly above the cost in the U.S. when adjusted for currency rates. Following the weakening of many world currencies compared to the U.S. dollar in recent months, however, Apple's price increases in those countries will help reset the company's desired pricing matrix but increase costs somewhat for developers overseas.

Elsewhere, the prices of Apple physical products are seeing slight hikes in a few countries. Apple Toolbox reports Apple has increased the price of products like the Mac, iPhone, and iPod in Turkey, a country where the company's products are already among the highest priced in the world. And the increase in prices may not stop there, as the Turkish Minister of Economy recently announced a plan to gain favor for products made in Turkey by introducing taxes on imported smartphones, computers, and tablets.

A MacRumors reader has also pointed out that the Norwegian people will be facing higher prices for Apple products, with the new iMac with Retina 5K Display and iPhone 6 seeing 8.3 and 12 percent increases respectively. The MacBook Pro with Retina Display received the biggest price jump, going from 10,790 kr to 12,590 kr, roughly a 14 percent increase in the cost of the device.

Apple has been known to adjust the price of its products alongside fluctuating currency values, most drastically just last month when the Russian ruble saw a sharp drop in value, causing the company to temporarily shut down its Russian online store and return with significant price hikes days later.

Though far less dramatic, these price inflations seen in other parts of the world appear due to the weakening of the Turkish lira and Norwegian krone in recent months. Even so, it's not entirely clear why the company instituted the price change to these select few foreign markets, and whether or not other countries could see a similar price hike in the future, as many other currencies have also been weakening against the U.S. dollar.

nepalisherpa
Developer program should be free. They already make money off of ads and app prices.
Score: 21 Votes (Like | Disagree)


It is stupid that learning devs have to pay $99 to even be able to run their app on their devices without any workaround methods. Sure, you can buy a provisioning profile and UDID registration for $8-9 from some websites, but it's not the same thing.

They should only make you pay when you want to publish apps, not run them internally.
Score: 15 Votes (Like | Disagree)

Developer program should be free. They already make money off of ads and app prices.


While I partly agree with this, you can bet that a lot of people get into developing for the sake of putting some rubbish into the App Store hoping to make a quick buck. Without this rather steep entry level pricing we might have more trash in the App Store than we do now.
Score: 11 Votes (Like | Disagree)

MH01
I'd have no issues if apple adjusted the prices when the U.S dollar falls, they do not, but are one of the first to put up prices when the dollar goes up. Profit profit profit. I agree with others, it should be free, or close to it, it's the developers that are a huge part of apples success.

If it was not about the money they would not be raising the prices due to a stronger dollar! Of course it's about the money, in relation to this tread.
Score: 10 Votes (Like | Disagree)

Reason077
I suspect this has to do with new cross-border sales tax rules in the EU which have just come into effect.

That is, and always has been the case.

Anybody can download Xcode, make apps, and put them on their own devices for free. The developer program is to have the capability to publish them to the app store.

You cannot put your apps on your own device for free, without jailbreaking. For free, you can run on the simulator only.
Score: 5 Votes (Like | Disagree)
Read All Comments