The beta, build 12D445d, is available immediately to registered developers as an over-the-air update and it can also be downloaded from the iOS Developer Center. Today's update also includes Xcode 6.2 beta 2 with WatchKit. 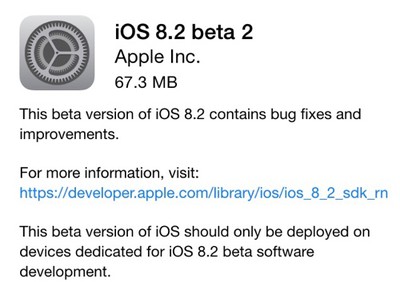 According to the release notes, iOS 8.2 beta 2 includes fixes for keyboards that may not appear in Safari, Maps, or other third-party apps in iOS simulator and it offers Siri support for Singapore English.

Several WatchKit fixes are bundled in as well, repairing a bug that caused notifications to fail to open an app, an issue that caused WatchKit apps to stop working in iOS 8 simulator, and more.

iOS 8.2 includes the WatchKit SDK, allowing developers to create apps, Glances, and notifications for Apple's upcoming wearable device ahead of its 2015 launch. The first iOS 8.2 beta, with WatchKit SDK and developer documentation, revealed several new details about the Apple Watch, including its heavy reliance on the iPhone and the different types of content developers can create for the device.

Is Safari any snappier?


Its so fast now that Safari starts, opens your web page, does your work and exits quicker than before you can take your finger off the screen.
Score: 17 Votes (Like | Disagree)

Anything new other than fixes?

2457282
Whatever happened to HomeKit? I have not seen anything about that since launch. When can I control everything through a unified app? Anyone have info on that?

MattMJB0188
Does anyone else hope that this beta restores the fluidity back into iOS. Like iOS 6 once had. The fact that animations are jerky on the iPhone 6/6+ says a lot.
Score: 11 Votes (Like | Disagree)

thekeyring
Lots of people complaining about bugs. Hopefully iOS 9 will be a "snow leopard" type release. Nothing radical, just some nice new features and a very stable OS.
Score: 7 Votes (Like | Disagree)

macintologist
After 8.1.1 made my iPhone 4S feel snappy again, I've run into ZERO problems with iOS 8. I'm very satisfied with this release.
Score: 5 Votes (Like | Disagree)
Read All Comments

Friday June 11, 2021 2:32 pm PDT by Juli Clover
macOS Monterey makes several improvements to password management, positioning iCloud Keychain as an ideal password service to replace third-party services like Lastpass and 1Password. In System Preferences, there's a new "Passwords" section that houses all of your iCloud Keychain logins and passwords so they're easier to get to, edit, and manage. There's a similar Passwords section that's...
Read Full Article • 194 comments