As of this week, Apple has begun offering several new toys in its online Apple Store, including a Barbie from Mattel, a Skylanders game, and a WowWee Robot. The new online-only additions come just ahead of the holiday season and mark Apple's continued efforts to bolster its products aimed at younger children.

The most curious new toy offered in the online Apple Store is a Barbie Fashion Design Maker Doll from Mattel. Sold for $49.95, the Barbie is the first doll that Apple has ever sold and at first glance, appears out of place in the online store. The Barbie is a standard Barbie doll, but it is designed to be used alongside a free app [Direct Link] on the iPad that allows children to create customized clothes on printable fabric sheets. 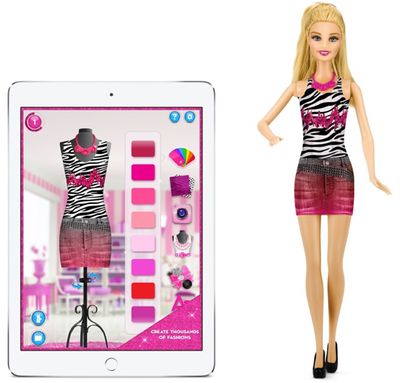 To start, download the free design software app to your iPad, or visit the website to download to your Mac or PC. Use it to create completely customized designs. Select patterns, colors, and accessories available within the program, and add photos to make a really personal statement. Print your finished and fabulous creations onto the eight enclosed printable fabric sheets -- and watch them go from 2D to 3D.

Full of personality, WowWee's MiP gesture-controlled robot gives you seven different modes and a free app for your iPhone, iPad, or iPod touch that offers a bunch of games. Swipe your hands in front MiP's eyes to the direction of your choosing and watch him follow suit. Or load up MiP's tray with a can of soda and use the MiP app to deliver it. MiP is a loveable toy your whole family can enjoy.

Apple has long offered a variety of iOS-related toys suitable for both children and adults like the Anki DRIVE and the Sphero, but over the course of the last few months, the company has added several accessories oriented solely at its youngest consumers. Products added in 2014 include the Philips/Disney Friends of Hue StoryLight kit, the Tiggly Shapes toddler game, and the Osmo educational gaming system are all aimed at children.

It is not entirely clear why Apple has boosted its focus on accessories for younger children in recent months, but drawing kids into the Apple Store with iPad and iPhone-oriented toys pushes them into the Apple ecosystem at an early age, potentially allowing the company to create lifelong customers.

The expanded range of toys offered by Apple also lets the company reach a whole new demographic and it may be part of new retail chief Angela Ahrendts' efforts to redesign the Apple retail experience. As noted earlier this year, Apple's new head of retail is aiming to overhaul the end-to-end Apple Store sales experience, reimagining product discovery and improving customer interactions with employees.

Rayd5365
This will be awesome, young girls can get a start on their unrealistic body expectations at the Apple store now. :)
Score: 28 Votes (Like | Disagree)

This will be awesome, young girls can get a start on their unrealistic body expectations at the Apple store now. :)


Actually girls used to be slim before they cut PE, invented fast food, ding dongs, video games, and a life that involves just moving on the couch from one LCD to another.
Score: 19 Votes (Like | Disagree)

Actually girls used to be slim before they cut PE, invented fast food, ding dongs, video games, and a life that involves just moving on the couch from one LCD to another.

Do you even know what your point is?
Score: 13 Votes (Like | Disagree)

cogitodexter
Barbie? I genuinely thought Apple were better than that.

If there's a toy that tries to accentuate the idea that 'size zero' is the peak achievement any girl can aspire to, then 'Barbie' is definitely the guilty one.

I know someone who has been driven to suicidal thoughts in part because of the unrealistic expectations about what the female figure 'should' look like.

Apple, especially considering its commitment to equality, should have no part of it.
Score: 11 Votes (Like | Disagree)

You want to develop brand awareness at a young age...


If only there were a way to market to fetuses still in the womb. Shareholders would love that.
Score: 11 Votes (Like | Disagree)

Nunyabinez
My daughter can use my iPhone 6+ as her Barbie's big screen TV.
Score: 9 Votes (Like | Disagree)
Read All Comments