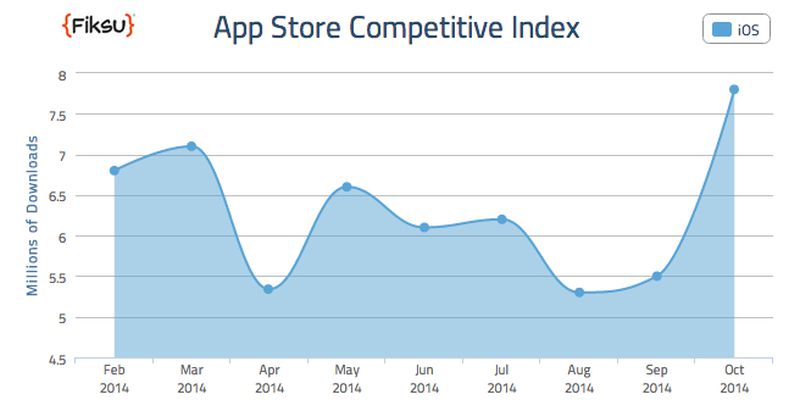 According to Fiksu's October App Store Competitive Index, app downloads reached a record-setting high of 7.8 million per day across the top 200 free iOS apps. This is a 42 percent jump from September and a 39 percent increase year-over-year, with the trend expected to continue into the holidays.

Fiksu also highlights a disparity between rising advertising costs and a drop in marketing costs per loyal user for app developers, pointing to how nurturing a loyal user base can ensure users immediately add their favorite existing apps to new devices.

Despite the marked rise in advertising costs particularly on iOS, the Cost Per Loyal User Index (CPLU) indicated a slight decline in October to $2.16 from September’s $2.25. This decrease is a result of the tendency of app users to quickly re-download their most-used “vital” apps during upgrades. The first set of apps users download on their new iPhone 6s are likely to be those they can’t live without, which makes them much more likely to become loyal users of those apps.

Apple's iPhone 6 and 6 Plus launched in September with a record-breaking 10 million units sold during the first weekend of retail availability. Apple sold a total of 39.3 million iPhones in fiscal Q4 2014 and 169.2 million iPhones for the year. This growth is expected to continue in the holiday quarter with predicted sales of 71.5 million units.

brianvictor7
This can only mean doom for Apple. ;)
Rating: 7 Votes

This can only mean doom for Apple. ;)


Yep. One of two things will happen in this thread-

Either someone will find some way to spin this around into a negative, or they'll bring up completely unrelated issues they're having with an Apple product in order to find something to complain about.

Back on topic- this trend should continue throughout the November and December numbers as more people that want an iPhone 6 or 6 Plus actually start receiving them.
Rating: 6 Votes


Would you please stop letting the facts get in the way of peoples' Apple hate...?
Rating: 4 Votes

The way I see it is that iOS 8 is so buggy that so many people had to setup their iPhone 6/6+ as a new device instead of backing up their old phone and restoring.


I'm sure that's what most of the users here believe. MacRumors is an echo chamber where problems and issues get repeatedly magnified and amplified until it's assumed that every device has every problem imaginable.

In the real world, there are people that enjoy their Apple products- because the majority of them do work as expected.
Rating: 4 Votes

This. Plus: New phone= ICloud Restore = Redownload all my apps without even looking at the AppStore.


Such a load of BS since everyone was forced to download updated apps after iOS8 was forced on everybody.


Clearly you are both Apple haters astroturfing for Samsung ;)
Rating: 4 Votes

kramerdude
Wonder what it would look like if people could actually buy iPhones.
Rating: 4 Votes

Steve Jobs would have never allowed these iPhone screen sizes.


We all love and miss Steve. For better or worse, we have to let him go. That's life, it just works that way. :apple:
Rating: 3 Votes

Such a load of BS since everyone was forced to download updated apps after iOS8 was forced on everybody.

Yeah, record downoads of iOS8.1 to make up for the buggy crap that was iOS8.
Rating: 3 Votes

djtech42
I've been downloading a bunch of apps because I actually have a lot of storage now with my 128 GB iPhone 6 Plus.
Rating: 2 Votes