The previously announced SteelSeries Stratus XL has officially launched today on the Apple Store. Following in the footsteps of the original Stratus controller, the beefed-up Stratus XL provides a larger frame that gives it some parity to console controllers in terms of relative size and button layout.

The Stratus XL connects to an iPad, iPhone, or iPod touch using a wireless Bluetooth connection, and the large design fits all of the expected control inputs: two joysticks, a pressure-sensitive directional pad, four action buttons, and four shoulder buttons that include two analog trigger buttons. 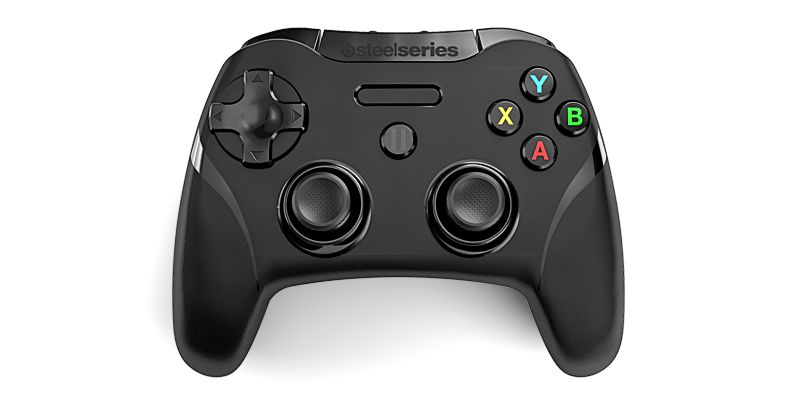 Our sister site TouchArcade got a hands-on with the controller at E3 this past summer, and found the new device favorable over the diminutive size of the original Stratus. They noted, "Instead of curling your hands around the tiny SteelSeries Stratus, holding the SteelSeries Stratus XL is more similar to having an Xbox 360 or Xbox One controller in your hands."

The Stratus XL uses AA batteries instead of a rechargeable battery pack. SteelSeries says the batteries should last for 40+ hours of playtime, and a switch on the back of the device should help users prevent heavy drainage of the batteries when not in use.


The SteelSeries Stratus XL can be purchased now from the Apple Store for $69.95, which is about $10 over the price tag of the PS4 DualShock 4 and the Xbox One Wireless Controller. The Stratus XL will be available for direct purchase from the SteelSeries official website, and for hands-on demos at select Apple Stores, on December 6.

furi0usbee
Hey Apple, I'd buy one of theses *and* a new Apple TV if you just let games run on the damn thing. Want my money?
Rating: 9 Votes

Kissaragi
I wish apple would just let an xbox 1 or ps4 controller connect to iOS devices. They should make controller compatibility a compulsory feature in games too.
Rating: 9 Votes

I wish Sony and Microsoft would just release a compatible controller.

I think you mean you wish Apple would let their controllers be used with iOS.

Especially in the case of the DualShock 4, Sony did a great job making it wonderfully cross-platform. Besides just a PlayStation, you can use it on a Mac and PC wired or wirelessly, and you can use it wired with Android devices.

They should make controller compatibility a compulsory feature in games too.


I agree with this with some restrictions - all games with virtual controls should be required to be able to be controlled with an external controller.

macduke
Finally a reasonably priced controller (NOT $100+) that checks most of the boxes for me. I only wish that it had an offset thumbstick like the Xbox controller. Basically just switch the location of the left thumbstick and the d-pad and it's all good.

What they should do next is release an Apple TV 4 and Apple TV 4S (or whatever they call it). Charge $99 for the Apple TV 4 with an A7, 1GB RAM and 16GB of storage for basic apps (current one is 8GB for OS and streaming cache). Charge $199 for the TV 4S with an A8X, 2GB of ram and 32GB of storage. Charge $299 for 64GB. Don't think Apple can hit that price point? Here is the breakdown of the price for the iPad Air 2 parts that they could put in an S model Apple TV (remember Apple TVs have mostly iOS hardware inside, but no expensive displays, digitizers, cellular chips, battery, or fancy aluminum enclosures):

So for $199 32GB Apple TV 4S, the cost to make is about $88. The A8X with two quad-core graphics chips, on paper, puts out about as many GFLOPS as an Xbox 360, but with more RAM so you can run other tasks in the background similar to a newer console like the Xbox One, and you could always have a microphone listening with Siri support to pause your show, open Netflix, etc. A microphone would add a couple bucks to the price. But even at $90 that's a pretty solid $109 margin. These are all estimates but I think they are reasonable. Factor in a product mix that includes a 64GB model for more games and you push that margin even higher.

I think there would be a market for something like that. There are many people who want to play casual games in their living room with their kids or family, but don't want to shell out $400-500 for an Xbox or PS4 and $60/game. With an Apple TV gaming edition, you get a $199 box that supports tons of fairly inexpensive games, you could support motion/gesture control with an attached iOS device that they're already likely to own, you make it the hub of their living room with Siri support, introduce a brand new way of ordering channels piece by piece (I think this has been delaying the new Apple TV), and you're good to go. If you want to run simple apps and games then get the basic model. Even establish a premium game section on the App Store with "outlandish" $20-30 prices. That's still cheap compared to consoles, but would provide incentive for more AAA titles to be developed for iOS across the board, while allowing developers to focus on fancy features for newer devices with higher-end specs. But if Apple does this, then I think they should absolutely design their own controllers alongside 3rd party solutions. And like somebody else said, they need to start requiring that apps with virtual on-screen controls (not swipes, but actual buttons) support controllers as well.
Rating: 3 Votes

I wish apple would just let an xbox 1 or ps4 controller connect to iOS devices. They should make controller compatibility a compulsory feature in games too.


I wish Sony and Microsoft would just release a compatible controller.
Rating: 3 Votes

Dotten
You can´t get this quality cheaper!

Before people complained about the 100 bucks, now it´s 30% cheaper! And still complains. You need to understand that you cant get a quality MFI controller much cheaper than this! There is no reason to all this ********...
For people who enjoy mobile/iPad gaming, this is a need!!! :mad:
Rating: 2 Votes


the article states its only 10 bucks more than the highly mass produced PS and XB wireless controllers. for a smaller scaled product that doesn't seem unreasonable to me.

i remember when people were complaining about $100. now even 30% cheaper isn't good enough....oh, brother

not really, ps4 and xb1 controllers have been down in the $35 dollar range if you watch slickdeals

I think you mean you wish Apple would let their controllers be used with iOS.

Especially in the case of the DualShock 4, Sony did a great job making it wonderfully cross-platform. Besides just a PlayStation, you can use it on a Mac and PC wired or wirelessly, and you can use it wired with Android devices.

This one's in Apple's court.


nope. the MFI spec for controllers is published. its up to the manufacturers to meet it.
Rating: 2 Votes

smartphone "gaming" its a complete **** with all those "free"2play junk. i got a ps vita


Which also has f2p junk on it.

There are plenty of high end games available for iOS too, just needs a little bit of knowing what you are after.
Rating: 2 Votes
[ Read All Comments ]