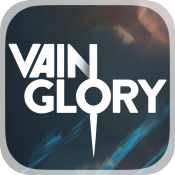 Vainglory, showcased as one of the examples of the capabilities of the iPhone 6 back in September, is now available for download. Developer Super Evil Megacorp announced today that the game can be downloaded on the App Store in North America, South America, the Middle East, and Africa, with a European launch coming this Thursday. Japan, China, and Korea are promised to closely follow. The game actually launched unexpectedly early, with some users able to download the app yesterday afternoon.

Vainglory is a MOBA (Massively Online Battle Arena) that puts players in teams of three, each team fighting to destroy a crystal at the opponent's home base in "fast-paced, 20 minute online multiplayer matches." Mobile MOBAs are nothing new, with games like Fates Forever and a handful of others finding success in taking the PC-centric sub-genre and grafting it onto a mobile phone touchscreen.

“Vainglory is not about casualizing a core genre or making a direct port of an existing game,” said Stephan Sherman, Chief Creative Officer of Super Evil Megacorp. “To make Vainglory, we started from scratch to create that core MOBA experience — the highs and the lows, the build-up of anticipation, the sweet victory or bitter defeat. We want you to feel how it feels to play a core game — with the immediacy of touch.

“Vainglory opens up a whole new world of experiences in touch-screen gaming by playing together with friends in the same room, as a LAN party. While queuing up solo for online multiplayer games is fun and rewarding, the intensity of team play with friends around the table is incredible. Plus, trash talk. It’s like the LAN parties of old — except no heavy PC equipment required.”

The game is free-to-play, with certain characters available to everyone at specific time intervals. Users can use in-game cash accrued through gameplay to unlock new classes, or opt to pay real-world money for those classes if impatient. Notably, however, users can't use real money to purchase character perks and upgrades or one-time-use in-game bonuses.

Vainglory is available to download for free on the App Store for the iPhone [Direct Link] and iPad [Direct Link].

I'm excited to play the game. I love DOTA, hopefully this will give me the same experience on my iPhone.


It won't. I tried a few matches, it's okay, but nothing spectacular.

I play LoL and DOTA and obviously we're dealing with 2 different platforms here, but there doesn't seem to be much of a challenge. Hero's of Order and Chaos is better than this even if it's graphics aren't quite to this scale.
Rating: 2 Votes

friedmud
I played some last night. It's decent... but not awesome.

Also... I got pretty annoyed at the view being locked to your character (unless you touch the map... but then the view springs right back to your character as soon as you lift a finger). From playing LoL I'm pretty used to moving my view down the lane and clicking on a tower down the lane to send my guy to while I go look at what's happening elsewhere in the world while he walks. You _can_ actually do that in this game... but you have to use two hands (again). With one hand/finger touch the map then with the other hand/finger touch where you want your guy to walk... it's kinda wonky and the view springs around a lot... but it is doable.

Also... if they were going to lock the view to your character then let me "touch and hold" to make him walk in a direction. That way I can just "hold" on the left or right side of the screen to make him walk down the lane. As it is now you have to click your way all the way down the lane (unless you use the trick I outlined above).

Finally: Some of the buttons (like the teleport home and shop buttons) don't respond very well. I find myself tapping on them a few times...

Basically: They claim that the game is "Perfected for Touch"... but I found it to be almost the opposite. I don't see anything that they did here that is a unique take on MOBA on mobile.

However: The graphics are great - and the gameplay is really smooth. The abilities seem to be well thought out and flow together well. I do like the way the Store is laid out and it was easy to just jump into a game... so I probably will play it some more.

Is it just me? I had this game for a few days now- and I'm in Europe.


I was thinking the same thing.
Rating: 1 Votes

Milese3
Is it just me? I had this game for a few days now- and I'm in Europe.
Rating: 1 Votes

rweavere
I'm excited to play the game. I love DOTA, hopefully this will give me the same experience on my iPhone.
Rating: 1 Votes