With the WatchKit SDK now in the hands of developers, some new information about Apple's wearable device is coming out, including its display resolution, which was not previously disclosed by Apple. 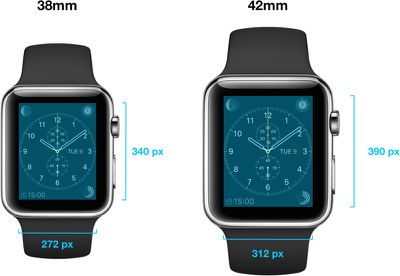 In addition to unveiling information on the device's resolution, Apple's WatchKit guidelines give some insight into how Apple views the device. Apple asks developers to be mindful of certain concepts when creating content for the Apple Watch, including its deep personalization and connection to people via heart rate and activity monitoring.

According to Apple, the Apple Watch aims to "blur the boundaries between physical object and software" through the Digital Crown navigation tool, the Taptic Engine for subtle alerts, and Force Touch, a new touch control system. Thoughtful design, says Apple, "should contribute to this experience of hardware and software feeling indistinguishable."

Apple suggests that all content created for the Apple Watch should be "lightweight," as the device is designed for simple interactions that are "accessible and dismissible quickly and easily, for both privacy and usability." Apps must "respect the context" in which the user accesses them, "briefly, frequently, and on a small display."

Apple's WatchKit development software became available earlier today, as part of the iOS 8.2 beta. The beta can be downloaded from Apple's developer site, and developers are able to immediately begin creating actionable notifications, Glances, and iPhone-driven apps for the Apple Watch. Apple says that developers will be able to create "fully native" apps "later next year."

Neepman
I fully expect iOS9 to have lots of app crippling goodness for those that choose not to buy a Watch to use with their phone.
Score: 20 Votes (Like | Disagree)

Small White Car
I don't know if it's likely, but it would be very bold for Apple to charge the same price the two sizes.

I see all sorts of people make their choice of phone size based on the price. Wouldn't it be cool if Apple's sales force could help people decide on what size watch to get based solely on how it looks on their arm and nothing else?

These are supposed to be fashion pieces, after all. Does Apple want to see ludicrously tiny watches on large men's arms because they wanted to save a few bucks? That doesn't help Apple sell more watches.

Yes, I know the bigger watch uses more materials, but it's nowhere close to the difference between an iPad Air and Mini. And it's not like the markup on these things isn't high enough to cover the few extra cents in glass per larger watch.

I dunno, it would certainly be a departure from every other Apple product. But in this one case I could see it being beneficial to Apple.
Score: 18 Votes (Like | Disagree)

According to Apple, the Apple Watch aims to "blur the boundaries between physical object and software" through the Digital Crown navigation tool, the Taptic Engine for subtle alerts, and Force Touch, a new touch control system. Thoughtful design, says Apple, "should contribute to this experience of hardware and software feeling indistinguishable."

mikeo007
The documentation is in points but this article mentions it in pixels.
The 2 are not interchangeable.