Jonathan Ive, Apple's Senior VP of Design, made a rare public appearance at the Design Museum in London yesterday (via Cult of Mac). At the event, he discussed everything from his view on the future of design to his opinions on failure with museum director Deyan Sudjic.

We shouldn’t be afraid to fail - if we are not failing we are not pushing. 80% of the stuff in the studio is not going to work. If something is not good enough, stop doing it.

The talk with Sudjic also included a roomful of up-and-coming design students, with Ive offering additional perspective on the design process and rejection.

"The best ideas start as conversations. A small change at the beginning of the design process defines an entirely different product at the end. At the start of the process the idea is just a thought - very fragile and exclusive. When the first physical manifestation is created everything changes. It is no longer exclusive, now it involves a lot of people." Ive also mentioned, "There are 9 rejected ideas for every idea that works." 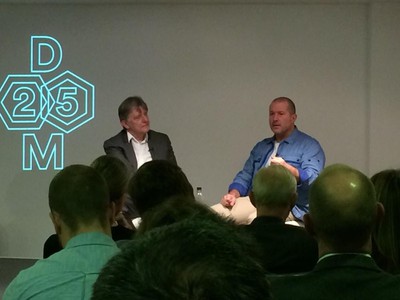 Photo by @nickcorston)
Unfortunately for those design hopefuls listening to Ive, the odds of working in his team are slim. Apple's Industrial Design team is notoriously difficult to get into, in large part because its members never leave the company. The eighteen-person team hasn't seen a single member leave for fifteen years. "I like to work in a small team," Ive told Sudjic. "There is only 18 of us on the design team. Nobody has ever left."

Ive also touched on how to gain experience in the field, design studies in schools today, and the difference between making something different and making it better.

Our goal is to desperately make the best products we can. We’re not naive. We trust that if we’re successful and we make good products, that people will like them. And we trust that if people like them, they’ll buy them. And we figured out the operation and we’re effective. We know what we’re doing, so we’ll make money, but it’s a tough sequence.

Ive has famously remained out of the spotlight for much of his tenure at Apple, but has opened up considerably since taking on new responsibilities for software design and more recently with the impending launch of the Apple Watch. Recent appearances have included an awards ceremony hosted by the San Francisco Museum of Modern Art and a Vanity Fair summit in San Francisco.

hipnetic
Seems fitting. When it comes to user interface design, Ive is an expert on Design Failure.
Score: 18 Votes (Like | Disagree)

Hey, I've seen what they do to people who want to leave in Sons of Anarchy and mob movies :D

All jokes aside. I think it is a bad idea to have a design team that has been so static for almost a generation.
Score: 14 Votes (Like | Disagree)

rGiskard
Here's a few quotes that were left out:

"If a design overheats and throttles the GPU (https://forums.macrumors.com/showthread.php?t=1815601) so hard it performs worse than the previous generation, then that's the price of beauty. Nothing is free, deal with it!"


"Form is paramount, ergonomics are for dork engineers. If a user must give his computer a reach around to access an SD Card reader, then that is the price of thin."

"If a user can access the diabolical innards of a design, then it is a failure. The ultimate goal is a perfectly sealed disposable computer, because we here at Apple love the environment and want to change the world!"

The best ideas start as conversations.

"There are 9 rejected ideas for every idea that works." Lesson to Samsung: get rid of the half-baked concepts and ideas *before* you get to production.


Jeez. Someone had to lower the thread to Samsung bashing. Can we just leave it alone for even one article?
Score: 9 Votes (Like | Disagree)

All jokes aside. I think it is a bad idea to have a design team that has been so static for almost a generation.


Their marketing must be as static, which would explain why Apple thinks U2 is cool.
Score: 8 Votes (Like | Disagree)
Read All Comments

Sunday August 1, 2021 6:21 am PDT by Sami Fathi
Models of the Apple Watch Series 6 with titanium cases part of the "Apple Watch Edition" collection is currently widely unavailable for pick-up in several of Apple's retail stores in the United States and is unavailable entirely for delivery in major markets. Noted by Bloomberg's Mark Gurman in the latest edition of his "Power On" newsletter, titanium models of the Apple Watch Series 6,...
Read Full Article • 157 comments