As the holidays approach, deals on iPhones, iPads, Macs, and Apple accessories will be picking up, culminating in a slew of deals around Black Friday. Some retailers have already begun offering discounts on Apple products, and this week, there are discounts on the Retina iMac, a range of older iPads, and various Apple accessories including Western Digital hard drives and Beats earphones.

Apple's newest Retina iMac hasn't been available for long, but Amazon is already offering the stock machine (3.5GHz/8GB/1TB) for $2,449, a discount of $50. 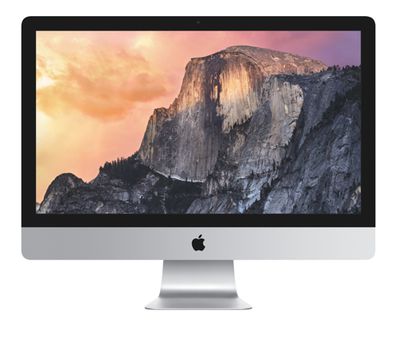 MacMall isn't offering significant discounts on the Retina iMac (approximately $5 off all models), but the site does have 25 different configurations in stock, ranging from the base model for $2,494 to the higher-end 4.0GHz/32GB/512GB model for $3,894. The benefit to ordering from MacMall is that the machines are in stock and likely to ship faster than purchasing from Apple, as Apple's store is offering shipping estimates of 7 to 10 days.

Now that the iPad Air 2 is available, Best Buy is offering significant discounts on the older iPad Air models. While the iPad Air doesn't offer Touch ID or the fast A8X processor found in the iPad Air 2, it's still a very capable device for those who would rather get a good price than the latest bells and whistles.

As with the iPad Air, it's now possible to get discontinued models of the iPad mini 2 at a steep discount. Apple's no longer selling the iPad mini 2 in higher capacities, leading discounters to offer excellent deals on models with lots of storage. There's little difference between the mini 2 and the mini 3 aside from Touch ID, making the mini 2 a very good purchase. Deals below are from Best Buy.

Walmart has a limited time deal offering the original 16GB WiFi-only iPad mini in Silver or Space Gray for $199, a $50 discount off Apple's price for the tablet.

There are a few deals on the latest 2014 Retina MacBook Pros this month, offering some of the biggest discounts we've seen on the notebooks thus far.

Best Buy is offering $20 to $40 off all Western Digital portable hard drives, dropping prices as low as $60 for a 500GB My Passport Ultra. Speck MacBook Cases for the MacBook Pro and MacBook Air are available for $19.99 from Groupon, a discount of $30. Groupon is also selling the Powerbeats by Dr. Dre Earbud headphones for $79.99, a discount of $70.

For the next few weeks, Target will be offering 10 percent off all of the items on a child's wish list. Parents need to download the Target Wish List app and have kids create a wish list of products that will then be available at a 10 percent discount. Apple products are excluded, but Apple accessories such as cases are included.

Make sure to check out our deals posts each week for the latest products that are available at low prices, and keep an eye on our Black Friday roundup, which will be updated on a regular basis with all of the discounts we find on popular Apple products.

Looking at those linked URLs this really should read;

"MacRumors is an affiliate partner with pretty much all of these vendors."


And your point? I don't think they are trying to hide the fact, and as we all enjoy our apple products and MacRumors where is the harm is showing people where they can make a saving? If they get a kick back, good for them. I wish they could do a similar round up for UK shops.
Score: 6 Votes (Like | Disagree)

CrashX
Does the iPad mini offer a big enough screen to read a PDF?

Just wondering, as it's impossible on a Kindle Paperwhite.
Score: 3 Votes (Like | Disagree)


Looking at those linked URLs this really should read;

"MacRumors is an affiliate partner with pretty much all of these vendors."
Score: 2 Votes (Like | Disagree)
Read All Comments