Apple's new iPad Air 2 and iPad mini 3 have begun hitting retail stores, as we reported earlier, and the tablets are now available for in-store pickup for a limited number of retail locations that have received shipments. It appears that in-store availability is limited to Wi-Fi only tablets at this time.

Many stores on the east coast of the United States are showing wide availability of both tablets as stores receive shipments and unpack boxes. Availability on the west coast is still limited as it is earlier in the day and stores are not yet prepared to begin retail sales. 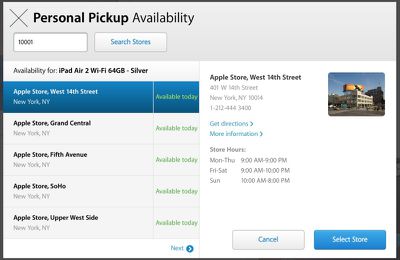 Apple store employees appear to be unaware that stores are receiving stock today, as several phone calls placed by MacRumors resulted in responses suggesting the tablets would not arrive in stores until later in the week or early next week.

The iPad Air 2 is still showing shipping estimates of two to four days when ordered online, and some rumors have suggested that supplies are limited, which explains the tablet's quiet in-store release. At announcement, Apple declined to state when the iPad Air 2 and the iPad mini 3 would be available in retail stores.

While the iPad mini 3 received only Touch ID and a gold color option, the iPad Air 2 has seen significant updates including a thinner design, a new "gapless" display, an anti-reflective coating, 2GB of RAM, an A8X processor, and an upgraded 8-megapixel camera.

No more 32gb option :/ That was the sweet-spot for my usage patterns.

So pay the same and get more. Not sure what the issue is.
Score: 5 Votes (Like | Disagree)

I will be waiting until next year for a new iPad, I want a new design change.


Not being ass but what redesign can they do? I just pick this up and it is as thin as the lightning cable - in other words there is no where to go from here.

It will always be a piece of glass with aluminum - can't see what more can they add do this?
Score: 5 Votes (Like | Disagree)

Wish the same could be said about the iPhone 6s.


You want to preorder a year ahead of time for pickup in the store?
Score: 5 Votes (Like | Disagree)

No more 32gb option :/ That was the sweet-spot for my usage patterns.

Some people's heads explode if they cant find SOMEthing to complain about...

So, the iPhone 6 had Call Gate and Bend Gate.

The Mac Mini had the Down Gate.

I wonder what will be the iPad's thing. Battery Gate?


Until it confirmed it was #RAMgate
Score: 3 Votes (Like | Disagree)
Read All Comments