Monday October 20, 2014 12:46 pm PDT by Juli Clover
With the release of Yosemite, Apple introduced a public beta test for the first time, allowing more than a million consumers to sign up for and participate in the Yosemite beta. In past years, beta testing new Mac software has been left up to developers and a select number of Apple Seed members. 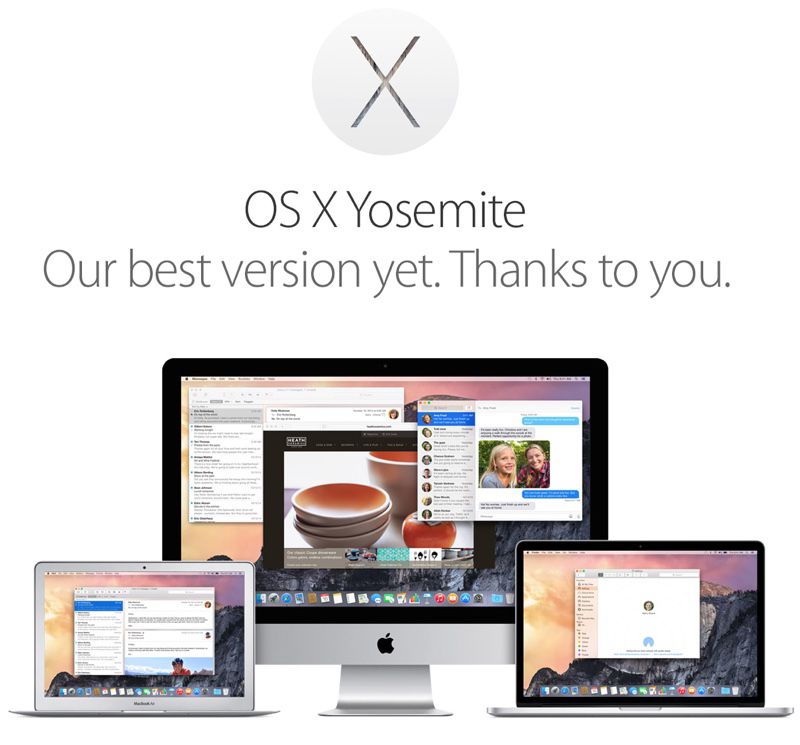 Thanks for participating in the OS X Yosemite Beta Program. As you know, OS X Yosemite brings an elegant redesign, continuity features for using your Mac, iPhone, and iPad together, and major enhancements to the apps you use every day. And it's now available for free from the Mac App Store.

Please install the release version of OS X Yosemite. As a member of the OS X Beta Program, you will continue to be offered beta versions of OS X software updates on any Mac that you installed the beta on. However, if you prefer to stop receiving beta updates, please click here.

It is unclear if Apple will seed minor OS X updates to the beta testing public, or if the next major public beta test will come in 2015 with the release of the next-generation OS X 10.11 Mac operating system.

Dilster3k
It's time to lay down Apple, take this next year off and do another Snow Leopard. We don't necessarily need crazy new features, we want full reliable stability.
Rating: 17 Votes

SandboxGeneral
I thought it was a successful venture and I enjoyed testing it out before its public release. I'll do it again next year.
Rating: 12 Votes

I know right!! How dare they send me an email THANKING ME for participating in a totally optional and voluntary program...


frankly, they didn't need to send out an email just for that

what's annoying with Apple is that once they own your email address, they just don't know when to stop harassing us :confused:

klover
Seems as if we've all been beta testers lately...
Rating: 9 Votes

So they outsourced the rigorous testing to it's intended user-base...?

This is the mother of all "this is not my job" commentary....


Not exactly. The intended user base is the "I'm afraid of computers" shoppers in Apple Stores. The Beta program is for people who want a taste of the "latest and greatest," and willing to take the risk that comes with it. In return, Apple maybe gets a better vetted product because it increases its test base and variations by a big multiple.

Apple isn't asking beta testers to do this as full time work. It's not even demanding they use it on their main machine. And it's not relying on this program to vet future OSes. But most of all it's completely voluntary, so your "this is not my job" commentary is 100% off point.
Rating: 7 Votes


Personal opinion aside, you really think the look of the OS came about because of the testers?
Rating: 5 Votes

Traverse
Made me feel special! :D:o

I think it's a good practice. Imagine the bugs or UI that would be present in the .0 release without the advanced feedback.

I wonder if Apple will consider iOS public betas in the future.


I doubt it. iOS has such a massive market with non-tech savy users. Too many people would accidentally do it or sign up without real understanding and then the typical beta issues would give Apple a bad reputation among general users for "buggy" software.

If you have a Mac, the odds are greater that you know what the beta is and is for.
Rating: 5 Votes

madsci954
I wonder if Apple will consider iOS public betas in the future.
Rating: 5 Votes

So they outsourced the rigorous testing to it's intended user-base...?

This is the mother of all "this is not my job" commentary....


Trolling today? :rolleyes:
Those of us who wanted to sign up did with full knowledge of what we were getting into.

frankly, they didn't need to send out an email just for that

what's annoying with Apple is that once they own your email address, they just don't know when to stop harassing us :confused:


They sent you a thank you and you complain. Weird.
Rating: 4 Votes

HenryDJP
I have to say Yosemite is quite stable. Zero issues. Runs fast and smooth.
Rating: 4 Votes