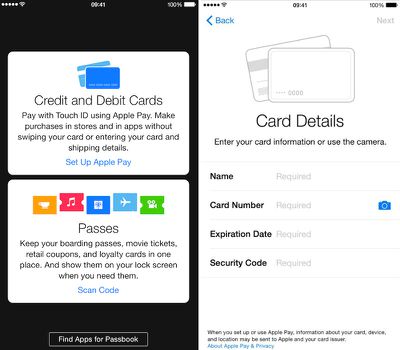 The setup prompt within Passbook is similar to the setup prompt to add passes, educating potential users on what the service is before providing a link to where users can input and scan their credit cards for use. Potential users have the choice to either input their credit card numbers via the keyboard or to take a photo of their card and have it inputted automatically.

The iPad gets the same setup screen as the iPhone version, but does not mention the ability to use Apple Pay in a retail store as no current iPads contain the NFC technology required to use the feature and it is uncertain whether it could be included in future iPads. Additionally, Apple Pay requires Touch ID, which current iPad models do not have, although future iPads are expected to have the new Touch ID home button.

iOS 8.1 is likely to be the update to include Apple Pay, although Apple has not yet flipped the switch within the betas seeded to developers. Instead, the company seems to have been preparing the features behind-the-scenes. Alongside Apple Pay, iOS 8.1 is expected to include a host of bug fixes for issues in iOS 8, including a fix for Bluetooth connectivity problems.

Still no word of this coming to thw UK though. NFC adoption is pretty poor here.

In fact I am still not sure this is quicker or easier than a chip and pin card.


Hmm, I've found NFC to be in quite a lot of places.
Sainsburys, Tesco, Whsmith, McDonald's, Pret a Manger, café Nero, Greggs, Eat, Uppercrust and I'm sure there's more that I haven't been in.

Granted most of them are food related but that's probably because of the £20 (iirc) limit for contactless payments.
Score: 4 Votes (Like | Disagree)

So I updated my iPhone 6 to 8.1 and launched Passbook to NOT find Apple Pay setup. Any ideas?


So, you DID NOT read the entire article?
Score: 3 Votes (Like | Disagree)

sziehr
awesome can't wait for this to happen.
Score: 3 Votes (Like | Disagree)

WRONG! The retailer also has to contract with their bank/processor to accept it also. One notable example is Walmart who will not accept Apple Pay...

Again, wrong wrong wrong. The retail establishment may have the terminal but that doesn't mean they will accept Apple Pay! There is a lot more behind the scenes that has to occur before they can accept Apple Pay, and not every notable retailer has signed up for this yet.

This stupidity has to stop folks. Just because there is a terminal does not mean Apple Pay is usable. The stores on Apple's web site are there only because they can accept Apple Pay. It's not universal by any means, and it's not going to be "everywhere you see a PayPass terminal"

Learn to research something before you post please: http://consumerist.com/2014/09/12/walmart-best-buy-wont-accept-apple-pay-at-their-stores/

What sucks about this is that the "other" pay applications will not have the same security that Apple Pay has, and will put at risk your money more than Apple at first. That may be fixed later, but I doubt it.

I must be wrong when I use my Wells Fargo debit card by tapping it at this store every day and it works. Of course the store had it enabled, it just didn't show it due to lazy programmers.

Apple Pay is NFC, it does NOT NEED ANYTHING at the register. Even take a look at Apple's website. Apple did not get 220,000 retailers to update their registers because the iPhone 6 is coming out.

Do you really think the retailers listed using IBM 4690 is going to have an entry for Apple Pay?

It looks like YOU need to do research. Come the day of Apple Pay being released I'll post videos of me using it at mom and pop that obviously didn't pay Apple. Especially if you're going to call people stupid.
Score: 2 Votes (Like | Disagree)

Quick question: Don't have a 6 or 6 plus, but does Apple Pay allow you to pay with not Apple Pay merchants? So if you wanted to buy from Wegmans instead of Whole Foods, would the transaction continue? 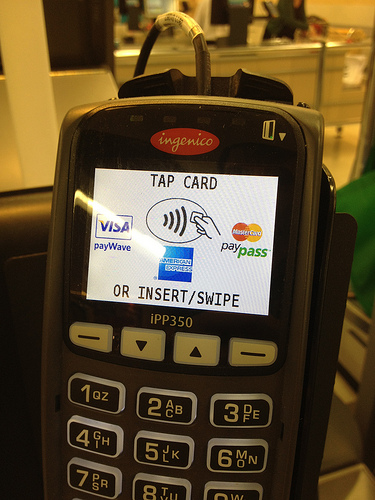 i guess you haven't been paying attention. the 6 has an NFC chip, which is the protocol used to do contactless payments. how on earth could older phones transmit that when they don't have the hardware to do so?

And I guess you can't read; try some basic reading comprehension before calling someone else out for perceived ignorance--my question was legitimate, deal with it.

I already acknowledged the fact that the 5s doesn't have an NFC chip and therefore cannot do contactless payments.

Can someone please explain to me why previous generation iPhones and iPads are being cut out of using Apple Pay for online purchases? Clearly I can't do contactless payments with my 5s because no NFC, but what's the deal otherwise? Is this just an artificial limitation to get people to buy new phones?

NFC-enabled contactless payments aren't the only method available for the Apple Pay system. It will also allow for online payments through supported apps. There is no physical point of service, just a method of online payment--meaning this doesn't appear to be a hardware issue on the face of it.

However, others have explained that there is a secure element for credit cards separate from the secure enclave for Touch ID. This means it is a hardware issue after all. So thank you to those that actually provided useful input.
Score: 2 Votes (Like | Disagree)
Read All Comments