Apple's rumored 12.9-inch iPad may feature an operating system that integrates OS X and iOS, according to supply chain sources speaking to Digitimes. The sources state that Apple has two 12.9-inch iPad prototypes in development, with one model being a "2-in-1 device" that utilizes elements from both operating systems while the other resembles previous iPads. The report also notes that the 12.9-inch iPad isn't expected to go into mass production until 2015. 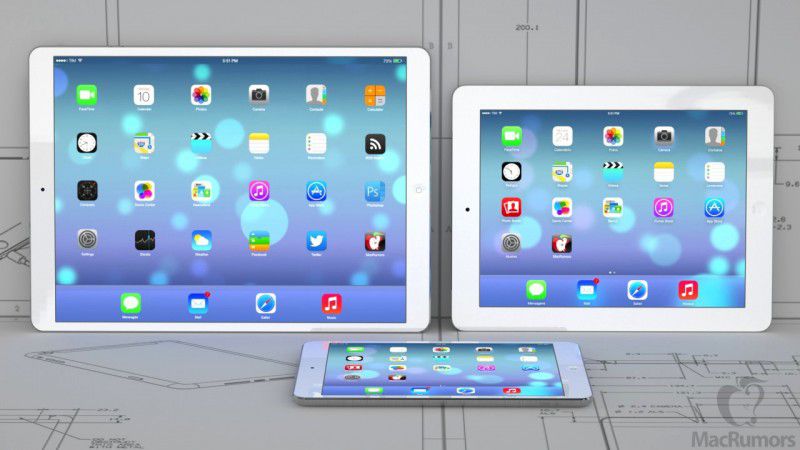 Mockup of a 12.9-inch iPad next to a fourth-generation iPad and iPad mini

The idea of Apple combining both OS X and iOS into one platform has been a popular subject for quite some time, as both have begun to share design principles and features. Notably, J.P. Morgan analyst Mark Moskowitz predicted earlier this year that the company is working on a combo operating system which would utilize an iOS device docked to a secondary display for a full computer experience.

However, Apple executives Phil Schiller and Craig Federighi stated in a January interview with Macworld that iOS and OS X convergence is a "non-goal" for the company, with the latter saying that Apple's is focused on making best products for unique purposes. That vision was also shared by Federighi at this year's Worldwide Developer Conference, where he stated the following during the reveal of Apple's new "Continuity" features for iOS 8 and OS X Yosemite:

At Apple, we believe you should be able to use the right device for the moment. We want the transitions between these moments to be as absolutely natural and seamless as possible.

Some of the Continuity features Apple is integrating with iOS 8 and OS X include "Handoff", which allows users to start a task on one device and finish it on another. Other features include the ability for users to answer a call made to their iPhone on the Mac, and the ability for iPads and Macs to receive SMS messages from non-Apple devices. It is likely that Apple will look to build more Continuity-like features that improve cross-platform integration between iOS and OS X as opposed to working on a full-blown hybrid platform.

Apple is said to be preparing its 12.9-inch iPad for early 2015. Some rumors have claimed that the tablet will come with an ultra high-resolution display and adopt an ultra-thin chassis and narrow side bezels similar to the iPad Air and Retina iPad mini.

farewelwilliams
hahaha, just from reading the title, I said to myself "must be from Digitimes"

sure enough, it's from Digitimes.
Rating: 38 Votes

Jaynamo
Thought 'someone' said that their competitors were "confused". 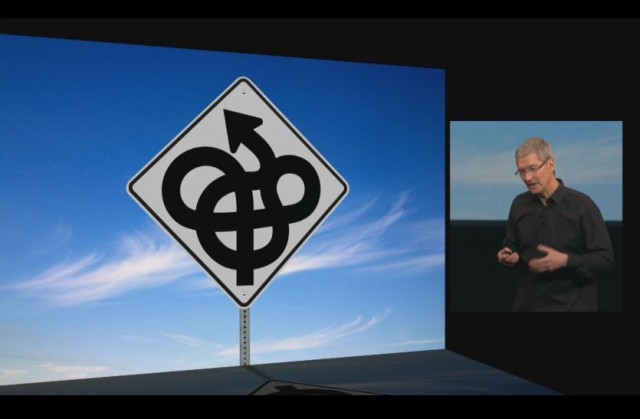 OS X is called that because it is based on unix. They might go to OS 11 if they change the whole platform of the OS, but otherwise we will see OS X 10.11 next year.

"Report" "Claims". Yeah, no. Apple already said that they would not make a hybrid of the Operating Systems.


Whilst I agree that this is an unlikely rumor, Apple also said that they wouldn’t make a video iPod (http://www.engadget.com/2004/04/29/steve-jobs-says-it-again-no-video-ipod/), tablet or phone (http://www.macobserver.com/tmo/article/Steve_Jobs_No_Tablet_No_PDA_No_Cell_Phone_Lots_Of_iPods/); that 7" tablets are terrible (http://www.imore.com/steve-jobs-7inch-tablets-terrible) and that 10" is the “minimum required for great tablet apps”; and that 3.5" (and then 4") was the ideal size for a phone.

Michaelgtrusa
I will have to see this to believe it.
Rating: 5 Votes

[/COLOR]
Apple has no iPad problem. It sells way more than the Mac, but only ⅓ of the iPhone, which makes sense because everyone needs a phone, whereas not everyone needs a tablet. To think sales would be higher is delusional.


Apple has an iPad problem. I never said it has to be as big as iPhone. Tablet sales are stagnating for several reasons. One of them is people do not feel the need to upgrade them because new features are not needed. I have seen this both with myself and family.

Also, the tablet has taken a huge hit in primary education. It started out as almost the holy grail, but as schools tried to use it people have realized it is not ready for productivity. It can be used for certain tasks, but in general a laptop is better. The cost of an iPad is still high compared to Chrombooks. I work in education and see this within my school district. Let's not forgot the disaster of LA schools. If Apple wants to get serious, they need to make educational software and services and do it soon.

As phones increase in size, people are also less in need of tablets. I personally am seeing this in the family also, with someone dumping the iPad mini/iPhone 5s for just the iPhone 6+.

I love the iPad; its a great device. But the integration between iOS and OSX is no where near as good as Apple leads people to believe, especially for serious work.

I DO NOT want a merged OS. If they create a 12" version that runs iOS when on its own, and boot into OSX when attacked to a keyboard/trackpad, that could be cool. A merger will only lead to a water-ed down OSX rather than a beefed up iOS. We have seen how Apple merges those two with iWork and such, and the OSX features always get the short end of the stick.
Rating: 4 Votes

deluxeshredder
I wouldn't be too much surprised by an "iOS X" hybrid OS, and I guess it would just be iPad apps in Launchpad integrated with their desktop counterparts.

Soulstorm
Not going to happen. This would require a new OS version, which would frustrate devs, as iOS 8 adoption was less than straightforward for them. Not to mention that Apple has already been pushing Yosemite and iOS so much that it would make no sense to fragment the entire ecosystem with another OS.
Rating: 4 Votes

"At Apple, we believe you should be able to use the right device for the moment. We want the transitions between these moments to be as absolutely natural and seamless as possible."

Well, that statement is telling. What about a device that has iOS when undocked and a OS X when docked? You get the best of both worlds with all of your data going with you when you undock. It's not a combining of the two OS variations, but an implementation of each in the right context.


This is what I was hinting at above. Having the files/data shared would be awesome, but the keep the software separate. The only issue would be building a hardware device capable of ARM/INTEL, which takes up twice as much space. That I do not see Apple doing...unless of court they port OSX to ARM.
Rating: 3 Votes
[ Read All Comments ]