Apple is working on a platform that combines OS X and iOS to boost iPhone and iPad sales, according to J.P. Morgan analyst Mark Moskowitz (via CNET). He believes that a combo operating system, which he has termed "iAnywhere," would work in tandem with an iOS device docked to a secondary display, running as a full-blown computer.

"While not a new idea, our global tech research team believes Apple could be on the cusp of introducing a new category with iAnywhere, a converged MacOS-iOS operating system that allows an iPhone or iPad to dock into a specially configured display to run as a computer," Moskowitz said. "In our view, this category would be a leapfrog event, potentially jumpstarting iPhone and iPad growth as well as peripherals and cloud-based software and services sales."

Other PC and smartphone manufacturers have experimented with dual operating systems and other hybrid solutions. Samsung, for example, introduced the ATIV Q, an Ultrabook capable of running and switching between both Windows 8 and Android 4.2.2. Motorola experimented with a docking solution for its Atrix 4G phone, but no manufacturer has thus far combined a dock with a converged mobile/desktop operating system. 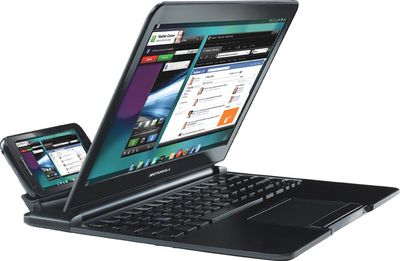 Motorola's Atrix Dock
Moskowitz believes Apple could introduce iAnywhere sometime in the next 12 to 18 months, but during a recent interview with Macworld, Apple executives Phil Schiller and Craig Federighi explicitly said that convergence between iOS and OS X was an "absolute non-goal" for the company.

"To say [OS X and iOS] should be the same, independent of their purpose? Let's just converge, for the sake of convergence? [It's] absolutely a non-goal," Federighi said. "You don’t want to say the Mac became less good at being a Mac because someone tried to turn it into iOS. At the same time, you don't want to feel like iOS was designed by [one] company and Mac was designed by [a different] company, and they're different for reasons of lack of common vision. We have a common sense of aesthetics, a common set of principles that drive us, and we're building the best products we can for their unique purposes.

While Schiller and Federighi noted iOS and OS X would share a common sense of aesthetics and design principles to make it easier for customers to switch between iOS devices and Macs, the two operating systems would remain distinctly "different in those things that are critical to their essence." Given the executives' strong stance on convergence, it seems unlikely the company has plans to debut the iAnywhere system Moskowitz has outlined.

Cougarcat
This just in, "analyst" makes a dumb prediction.
Score: 62 Votes (Like | Disagree)

tumtumtum
LOL I wish I got paid to be this retarded.
Score: 29 Votes (Like | Disagree)

ck2875
It must be nice to randomly spew out predictions once a month, hope one sticks (but if not no big deal), and call it a job.
Score: 9 Votes (Like | Disagree)

Oh, well, if an analyst at J.P. Morgan says it, then it's much less stupid... :rolleyes:

J.P. Morgan just settled a case with the Gov for $13 BILLION. In spite of that, the board then gave their CEO a 74% raise. You guys poke all the fun you want at the stupidity of analysts but their companies rule the world.

A few years ago, the core group of them ran the whole financial machine right to the edge of a cliff, got "our" government to immediately find $700 BILLION to bail them out and, that same year, paid themselves record bonuses. How many were prosecuted?

Lastly, remember "too big to fail"? That was the reason they had to be bailed out by the U.S. taxpayer (really by "our" government adding a huge loan onto the already-crushing debt). So naturally, once the bail out was successful, all those big banks that were too big were broken up right? Were any of the "too big" broken up?

Again, "stupid analysts" being stupid all the way to the bank.
Score: 7 Votes (Like | Disagree)
Read All Comments

Friday September 30, 2022 12:51 pm PDT by Juli Clover
Apple CEO Tim Cook has been touring Europe this week, sitting down for interviews with various media publications. Augmented reality has been a running theme in Cook's discussions, and it is a topic he brought up again in an interview with Dutch publication Bright, which is part of RTL News. "I think AR is a profound technology that will affect everything," Cook said, echoing comments from...
Read Full Article • 307 comments