Pebble is dealing with the threat of Apple's upcoming Apple Watch by making jokes about the enthusiasm Apple employees have shown for the device. On its website, Pebble has a graphic of a gleeful Pebble, which says "Chill." Above that, are the words "Breathe, Jony. It's just a watch."

Further down, Pebble advertises the seven day battery life of its smart watches. "Why measure battery life in days? 'Cuz we can." This is a reference to the poor battery life seen in other smart watches, including Samsung's Galaxy Gear and the Moto 360, both of which last less than a day before requiring a charge. 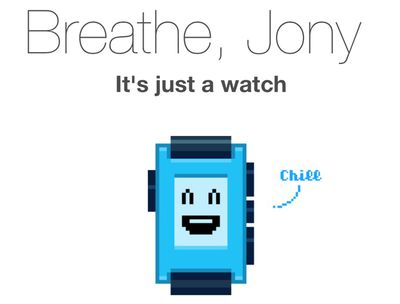 Though Apple has not announced battery life of the Apple Watch, rumors have suggested that it will last for about a day, requiring nightly charging. It is likely, however, that the company is continuing to make tweaks to improve battery as much as it can, which is why no specific information on battery has been released.

Pebble also touts its customizability and its relatively low cost while poking a bit of fun at some of Apple's Apple Watch statements. "Overpriced trophy watch wasn't on our to-do list," reads the site. "Pebble is made by real people, for real people keeping it real," it says, wrapping up with the following statement: "Just to recap, we made a watch. We didn't solve global warming."

In addition to highlighting the capabilities of the product with sly references to the Apple Watch, Pebble has also announced plans to cut the prices of both the Pebble and the Pebble Steel. The standard Pebble watch now retails for $99, while the more recently introduced Pebble Steel retails for $199. Both options are quite a bit more affordable than the Apple Watch, which is said to start at a price of $349.

timshundo
"Relax, it's just a watch!"

...as they begin their quick fade into obscurity.
Score: 86 Votes (Like | Disagree)

itsmemuffins
For the love of God. The Apple watch hasn't even been released yet and they are already running scared. :rolleyes:

Can manufacturers not advertise on their products own merits? Must they always make cheap swipes at Apple?
Score: 32 Votes (Like | Disagree)

TTile
Pebble is about to go the way of Nokia and Blackberry.
Score: 26 Votes (Like | Disagree)