Back in April 2013, it was announced that Apple had agreed to a $53 million settlement in a class action lawsuit involving iPhone and iPod touch units that may have been improperly denied warranty coverage due to liquid damage indicators having been triggered in the devices.

The settlement, which covers iPhones denied warranty coverage on or before December 31, 2009 and iPod touches denied coverage on or before June 30, 2010, stems from Apple's use of triggered liquid damage indicators as sufficient reason for denying warranty coverage. Given the timeframe for the issue, the settlement is limited to iPhone 3GS and earlier and third-generation iPod touch and earlier models.

With the indicators' manufacturer, 3M, acknowledging the indicators could be at least partially triggered by humidity and not necessarily direct liquid contact, some owners pursued a case against Apple for improperly denying warranty coverage. Apple did later adjust its procedures to require additional visual inspection for liquid damage on devices where the indicators had been triggered, but for those who had already paid out of pocket to replace their devices, the case continued. 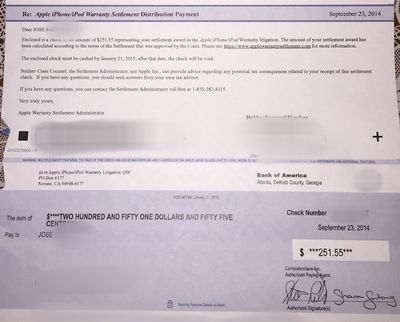 As outlined on the settlement home page, administrators finally began sending out settlement checks to eligible claimants last week, and a number of MacRumors readers have reported receiving their checks over the past few days.

Owners of several different iPhone models have reported receiving checks for $251.55, with some reporting amounts as high as $300 while others have received smaller amounts for affected iPod touch units. Users receiving checks have until January 21 to cash or deposit them.

Is it still "free money" when it's your own money you had to spend first?

I honestly don't even remember having a liquid damage claim, so needless to say I was a bit surprised to get a check.

Caution: the check arrives in a very generic looking envelope. I nearly threw it away without even opening it!
Score: 5 Votes (Like | Disagree)

mikemch16
I got this exact check in the mail. Time to go get a new iPhone :)
Score: 2 Votes (Like | Disagree)

MartinAppleGuy
Should have been coupons for buying a new iPhone :P
Score: 2 Votes (Like | Disagree)

This settlement is insane. I thought the lawyers always took 99% of the money and people are always lucky to get more than a $10 check.


Normally, the class action settlement that most people are familiar with are huge settlements. Involving millions of claimants, over relatively small amounts of money. (I overpaid for this toaster due to price fixing - here's 35 cents.) And while the lawyers receive a lot of money, they don't usually receive "most" of it.


An iPhone does not cost $200. The cheapest iPhone is $450. It's just that mobile phone providers in the US generally subsidize the cost of the phone in to their monthly plans to make the "down payment" cheaper.

Saying an iPhone is $200 is like saying a new car is free because you don't have to pay any money on the day you sign the paperwork. Or that a new house is $20,000 because that's what your down payment was.

People are getting large checks because they lost the use of their phone because Apple improperly denied a warranty claim. Because the person had to pay money to replace a phone that should have been replaced for free. In some cases, this cost was more than $200, because they either had to pay the [i]full[/] price of the phone to replace it, or had to pay an early termination fee with their carrier to get a subsidized-price phone.
Score: 1 Votes (Like | Disagree)


Unless you deducted the cost of your iPhone / iPod Touch as a business expense, this is not something that needs to be added to your income.
Score: 1 Votes (Like | Disagree)
Read All Comments