As noted by AnandTech, DisplayPort technology built into USB Type-C has the potential to connect monitors, cables, docking stations, and more. With the ability to support displays and carry video data via USB, USB Type-C could potentially serve as the next Thunderbolt connector, powering 4K and higher resolution displays. 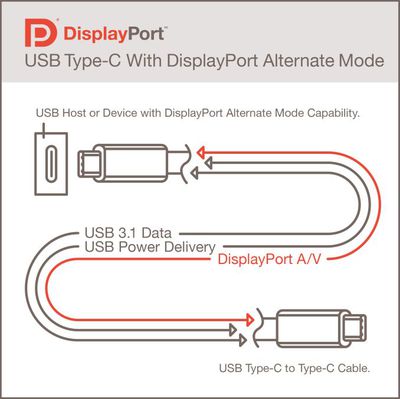 The DisplayPort Alt Mode repurposes some or all of the four existing SuperSpeed USB lanes to deliver full DisplayPort performance, and uses other signaling available in the USB Type-C connector for DisplayPort's AUX channel and HPD (Hot Plug Detection) function. This enables computers, tablets, smartphones, displays, and docking stations to implement the new USB Type-C connector at both ends while using the DisplayPort Standard over USB Type-C to transmit high-resolution A/V along with USB data and power.

Finalized in August, the USB Type-C connector specifications are much improved over previous USB generations. The slim connector is entirely reversible, making it easier to plug in, and due to its thin design, it's suitable for both mobile device and larger computers. It's also certified for USB 3.1 data rates of up to 10 Gbps and can deliver a maximum of 100W of power.

With an alternate DisplayPort mode and four lanes of signaling, one USB Type-C cable could be used to provide power to a device while also driving a connected display. According to VESA, Type-C ports and the first DisplayPort Alt Mode capable devices (using DisplayPort 1.2a) will be available beginning in 2015.

Earlier this morning, a rumor suggested Apple's upcoming 12-inch MacBook would take advantage of the new reversible USB Type-C connector, which is plausible as that device is rumored to begin shipping in mid-2015.

H2SO4
So before Thunderbolt gained traction it has serious competition?
They should have priced it reasonably while they had the chance, I wonder if TB will be the next FireWire as far as consumers are concerned.
Score: 20 Votes (Like | Disagree)

man, kinda sucks to have another connector standard. Oh well, i guess that's the price of progress. Maybe they're trying to figure out how to combine USB and thunderbolt and displayport.


You're right about everything except Thunderbolt. Thunderbolt is now DEAD. This just killed it. It's a total replacement for Thunderbolt 2 while retaining USB connectivity and cable standards AND is reversible. It gets rid of ALL major problems and ALL major complaints and it's a HUGE standard (unlike Thunderbolt which hardly anyone supports or uses except Apple). It sucks to be people who bought into Thunderbolt and it sucks to own a Mac Pro. You've just been PWNED! :eek: :D

I called this a couple of years ago. No one gives a crap about APPLE standards and Intel or not, it's ONLY been really used by Apple. You CANNOT create "standards" when you represent 8% of the market. Making matters worse, Apple wanted to have exclusive access to Thunderbolt the first year. WHY???? There was NOTHING available for it and it only meant that PC adoption would not occur for at least another year to even start. They helped doom their own connection standard. Call it Steve's dying folly if you like, but it was a stupid move.

Thunderbolt was always about ridiculously high bandwidth which required active chips to achieve. USB 3.1 next year will hit what Thunderbolt 1 got in 2011 (10Gbps), and Thunderbolt 3 next year will be pushing for 4x that (40Gbps). And since it's PCI-E, it doesn't have the overhead USB has.


Dream on. They can't even hardly get any devices to support Thunderbolt I several years later and they're all universally OVERPRICED. Don't give me the "Pro" line of defense because Apple has done everything in its power to KILL its own Pro market and hand it lock, stock and barrel to Windows. The Mac Pro is really a Prosumer machine (given the lack of internal expansion, rack mount capability and even software now that most have left the market), except most prosumers can't afford it. I doubt you'll even see Thunderbolt III. For goodness sake, look how long it's taken to get significant USB3 adoption by consumers (given the lack of desktop sales and the lack of mobile support). By the time Thunderbolt III makes an appearance, USB 4 will be out in short order and that will be the last you will EVER see of Thunderbolt, virtually guaranteed and IMO good riddance. We don't need competing standards and we certainly don't need overpriced products for those standards. Sometimes competition is BAD (look at HDDvd vs. Blu-Ray and how that only slowed adoption).
Score: 16 Votes (Like | Disagree)

So before Thunderbolt gained traction it has serious competition?
They should have priced it reasonably while they had the chance, I wonder if TB will be the next FireWire as far as consumers are concerned.

macduke
I think the problem with most of you guys is that you need to realize Thunderbolt is not for you. It's for professionals. It doesn't have the overhead that USB does and it's twice as fast as this new USB standard, with optical versions on the way that go 50Gbps and 100Gbps bi-directional. It's about having direct access to the motherboard externally. You run things like USB on top of Thunderbolt.
Score: 7 Votes (Like | Disagree)

krazygoat
Remember thunderbolt2 and maybe even 1 will be able to do USB 3.1 via an adapter.

We use Thunderbolt all the time. I have a Thunderbolt2 LG monitor on my desk now. We have dozens of very large thunderbolt 1 & 2 RAIDs. I use it on set for networking.

To me it is not an either or, thunderbolt did not make USB 2 or 3 go away and USB 3 while fast enough for most people did not make thunderbolt go away anny more than those technologies did not make 10GbE, Inifiniband, or even good ol' fiberchannel go away. Both connectors are small so I would want Thunderbolt AND USB 3.1.

Once the networking stack gets optimized (all done in software right now so IO can affect performance) then thunderbolt can take off as a networking technology too (also need switches). Remember too thunderbolt is specced to go to 100Gbps and USB 3.1 is just catching up to Thunderbolt 1
Score: 4 Votes (Like | Disagree)
Read All Comments