iFixIt is in the process of taking apart the new iPhone 6 Plus, currently on sale in Australia. Surprisingly, the team points out that the internal layout of the device is extremely similar to that of the iPhone 5s, except at a larger scale and with a bigger battery. The teardown's findings reveal the battery capacity of the device and some internal reorganization. 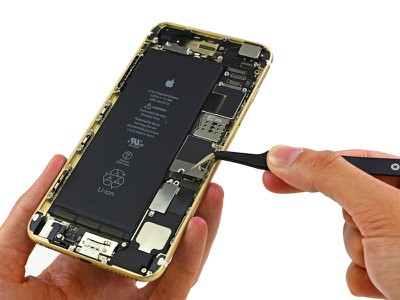 In removing the front panel from the rest of the device, the iFixIt team notes that there are "no noticeable booby traps", referring to the iPhone 5s' cable that ran from the Touch ID sensor to the Lightning port. The battery in the device is listed at 2915mAh at 3.82 volts, in line with the previously leaked battery prototype for the device and giving the 6 Plus double the battery capacity of the iPhone 5s' 1560mAh and much larger than the iPhone 6's 1810mAh battery.

iFixIt's teardown is still in progress and this post will be updated if anything significant is revealed.

Update 7:45 PM: iFixit has exposed Apple's new A8 processor in their teardown, which reveals the F8164A3PM inscribed on the chip. The second digit in that sequence, 8, corresponds to 8 Gigabits (1 GB) of RAM in Micron's catalog.

Update 11:38 PM: iFixit has assigned the iPhone 6 Plus a repairability score of 7 out of 10, which is an improvement over the iPhone 5s' score of 6 out of 10. The largest difference being the absence of the cable connecting the Touch ID Home button to the Lightning port, which resulted in the cable being torn if one is not careful opening the phone.

C. Robert
The damn internals are even beautiful. WTF is wrong with me?
Score: 24 Votes (Like | Disagree)

Glad they stuck with 1GB. No reason we need any more. Still runs better than any Samsung phone.

It's been confirmed multiple times that it's 1GB.

A user reported he had 5 Safari pages open without any refreshing so the RAM may not be as big a deal as some make it to be.


5 tabs is nothing. Try 10 and have other apps open in the background. Then see how 1GB holds up. If the next question is "why would you have all of that going at the same time?" , my question right back would be it's a premium smartphone that is advertised as being "the best" by Tim Cook and it should be able to do that in 2014.

Also, 1GB becomes less and less effective at handling operations as time goes on. Thus making the lifespan of this phone less than it should be

There is no legitimate argument against having 2GB of memory in iPhones and iPads these days. Battery life impact is negligible and it is strictly and solely a cost savings and thus profit increasing move to still use 1GB. Same goes for still keeping the 16GB iPhone but then jumping up to a 64 and then saying its a "deal" for consumers bc it's the same price as what the 32GB used to be. Right....
Score: 20 Votes (Like | Disagree)


I get confused easy. Are we still talking about Zak's ex or the iPhone here?
Score: 18 Votes (Like | Disagree)

Glad they stuck with 1GB. No reason we need any more. Still runs better than any Samsung phone.

But you certainly can't be glad they stuck with 1GB if they could have put 2GB in there and kept the price the same.

And the "No reason we need any more" line is just dumb. There is always a reason for more RAM. If you don't need it, your apps don't use it. But it's better to have than have not my friend.
Score: 17 Votes (Like | Disagree)

bigger is better according to my ex....