iFixit has already taken apart the new iPhone 5s, currently on sale in Australia. It is the second significant teardown of the device, which was taken apart earlier by Australian iPhone repair firm iExperts. Unsurprisingly, there are no drastic changes from the iPhone 5 to the 5s, but there are some new internals like the Touch ID sensor that are worth examining. 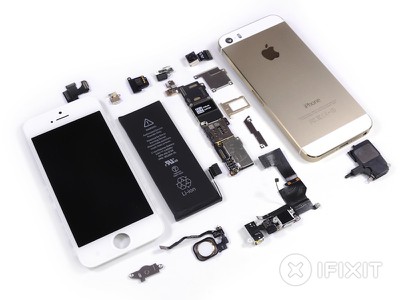 In removing the front panel from the rest of the iPhone 5s, the iFixit team notes that a new cable that runs from the Touch ID sensor to the Lightning port assembly, meaning that extreme care must be taken when removing the screen to avoid damaging the cable.

iFixit did express some concern over the amount of glue used to attach the battery -- a 3.8V - 5.92Wh - 1560mAh unit, slightly larger than the iPhone 5's 3.8V 1440mAh battery -- to the casing, noting that the dramatic increase in glue compared to the iPhone 5 could make it exceptionally difficult to replace the battery. The company also wondered if the sapphire home button was enough to protect the sensitive CMOS Touch ID sensor over time.

Looking at the logic board, iFixit could not find a standalone M7 motion coprocessor chip, dubbing it "invisible". The team believes the M7 may be special silicon built into the A7 chip itself.

Also of note was the striking lack of a discrete M7 co-processor. Perhaps the "M" stands for "magical," because it’s not there, folks. The mythical M7 is most likely a combination of motion-oriented components, and not an actual dedicated chip (as Apple implied during last week’s product announcement). Chock it up to savvy marketing.

Apple's iterative design has allowed it to streamline and optimize internal construction of the 5s, including the loss of extemporaneous antenna interconnect cables "leaving one less thing to break or get disconnected".

Overall, iFixit gave the iPhone 5s a repairability score of 6 out of 10 (10 being the easiest to repair), which is one point fewer than the iPhone 5's 7 out of 10. Compared to the iPhone 5, the 5s battery no longer has a convenient pull tab for removal and the Touch ID cable could be ripped out of its socket during front panel removal.

But iFixit is really obsessed with its hobbyist's view.

I can't tell you how many times their repair guides have saved me, my Macs and my wallet.
Score: 10 Votes (Like | Disagree)

All good stuff, more to come.

Prof.
So this is where all the Gold iPhones are going... :rolleyes:

RyanKohl
I just assumed that the M7 was built into the A7.
Score: 5 Votes (Like | Disagree)

are you an electrical engineer? nope. so you really don't have any idea why electronics companies glue components to their chassis...do some research. go talk to some hardware guys are your local university.

it's not a silly conspiracy.


The mechanical engineer would be the one to decide if the battery is glued or not.