Earlier this year, Apple acquired Burstly, the company behind the popular TestFlight service for managing beta testing of iOS apps, and at WWDC in June Apple announced it would be relaunching TestFlight with iOS 8 as an integrated service for developers and testers.

With the redesigned iTunes Connect web portal launching yesterday, the service is now including references to TestFlight and the company has made public a link to a universal iOS app [App Store] to allow users to install beta apps. 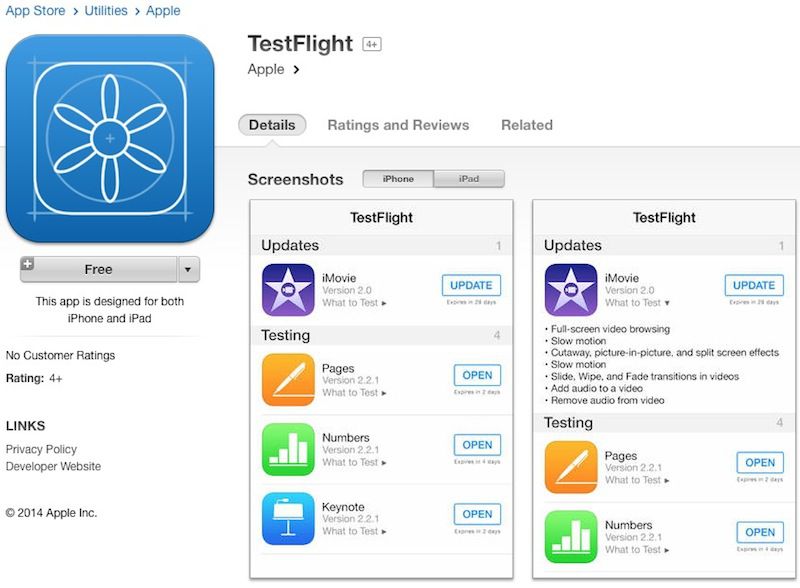 TestFlight allows app developers to invite you to beta test their apps on your iPhone, iPad, or iPod touch. Once you join a developer's beta test through their email invitation, TestFlight makes it easy to install or update to new bet versions as they become available.

- To receive your beta test invitation, all an app developer needs is your email address
- You will receive beta invitations in your inbox
- Accept the invitation to open TestFlight and install the app
- TestFlight will then notify you when new versions are available
- Tap to upgrade to the latest version and keep testing

The app requires iOS 8, and Apple will likely make a more thorough unveiling at next week's media event where it will announce the public launch date for iOS 8.

I've had TestFlight for the entirety of the iOS 8 beta being out and I haven't been invited to test a single app...


... You actually have to know developers... for them to add you to their account.
Rating: 4 Votes

I've had TestFlight for the entirety of the iOS 8 beta being out and I haven't been invited to test a single app...


You don't just sign up for testflight and get invited to random apps. It is up to developers to ask people to join their beta test.
Rating: 4 Votes

gibbz
This is going to make my life so easy. No more freaking provisioning madness.
Rating: 4 Votes