Amid all of the leaks today based on photos and videos from luxury modified iPhone vendor Feld & Volk [Instagram page], one additional point worth mentioning is the device's LTE modem. While photos posted to reveal the existence of an NFC chip from NXP has seen identifying marks on many of the other components blurred, a portion of the text printed on the LTE modem is visible, confirming the board does indeed contain Qualcomm's MDM9625M as had been previously rumored.

MDM9625M boxed in red
The MDM9625 is a Category 4 LTE modem, supporting speeds of up to 150 Mbps, compared to the MDM9615 Category 3 modem at up to 100 Mbps, which is found in the iPhone 5s, 5c, and 5. Some observers had been holding out hope that Apple might use Qualcomm's even faster MDM9635 Category 6 modem as is reportedly lined up for Samsung's upcoming Galaxy Alpha handset, but with Apple's history of conservatism in choosing its cellular technology and questions about production ramp-up for the MDM9635 make it unsurprising that Apple has opted for the MDM9625.

Likely WTR1625L boxed in red and WFR1620 boxed in blue
Part of the speed benefits of the MDM9625 and new LTE-Advanced technology compared to earlier generations of modems comes from the use of carrier aggregation to combine channels for greater bandwidth. With the MDM9625, this carrier aggregation requires a pair of companion chips, a WTR1625L transceiver chip and a WFR1620 chip. These chips appear to be located on the opposite of the iPhone 6 logic board from the LTE modem itself.

On the whole, the use of the MDM9625 in the iPhone 6 sets the stage for faster cellular data connectivity as networks are built out to support its capabilities, and Apple will likely tout some of these improvements during its media event scheduled for September 9.

jabingla2810
The tag line for the event should really say, "Do we really need to say any more?"
Score: 16 Votes (Like | Disagree) 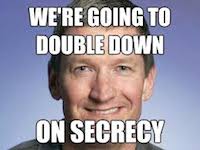 Friday January 15, 2021 1:46 pm PST by Juli Clover
Apple has started "early work" on an iPhone that has a foldable display, according to a new report from Bloomberg's Mark Gurman. Though testing of a foldable iPhone has begun, Apple has not committed to releasing a device that has a foldable display. Development has not yet expanded beyond a display and Apple does not have full foldable iPhone prototypes in its labs. Like foldable...
Read Full Article • 159 comments

Friday January 15, 2021 10:23 am PST by Juli Clover
Apple is developing two versions of the Mac Pro to succeed the Mac Pro that was first released in December 2019, according to a new report from Bloomberg. The first updated Mac Pro is a direct successor to the current Mac Pro and it will use the same design. It may also be equipped with Intel processors rather than Apple silicon chips, and it could be one of the sole machines in the Mac...
Read Full Article • 209 comments