Inside Apple's PR Practices, From Media Control to Attitude Shift Under Tim Cook

In a lengthy 9 part exposé, 9to5Mac's Mark Gurman delves into the inner workings of Apple's PR team. While much of what Gurman covers is already fairly well known, his coverage provides an expansive look at the way Apple's PR team operates, from its organizational structure to its efforts to control Apple's perception through media manipulation.

Despite Apple's size and its position as one of the most profitable companies in the world, its PR team is relatively small, comprised of approximately 30 employees in Cupertino along with a few dozen scattered around the world. In Cupertino, Apple PR is divided into seven teams: Momentum, Mac, Corporate Communications, iPhone, iPad, iTunes, and Events.

Along with organizing events and controlling product placement, Apple's PR teams keep a close eye on the media, despite its apparent indifference, and take steps to correct negative perceptions when deemed necessary.

So it's a surprise that Apple actually isn't that detached from the media: it's more like a teenage girl obsessively keeping her fingers on the pulse of coverage. Members of Apple PR seek tabloid photos of celebrities holding iPhones, while others read Apple-focused blogs actively, and keep tabs on prominent Apple beat writers using anonymized social media accounts. [...]

This oversight is so important to Apple that a few times a week, top executives are sent a document detailing the company's latest press coverage. When Apple is not pleased with coverage, it sometimes works to shift the narrative, even attempting to undermine giant news organizations.

For example, Gurman claims that Apple recently attempted to discredit Reuters over a story about Apple's accessibility practices that the company was not happy with. Gurman also points Apple's penchant for discrediting competitors, pointing towards an email Apple PR sent to 9to5Mac on an anti-Android story. 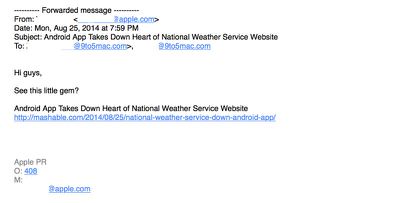 Along with giving tidbits of information to various reliable media outlets, Apple also gives review units and review guides to columnists and journalists who Gurman claims have a largely positive view of the company and its products.

Also likely contributing to which publications get early access to products is the nature of pre-coverage -- angles taken by writers during the product rumors cycle. As Brian Lam put it, "Apple can already tell what a review is going to say from [a publication's] pre-coverage, and they're not going to give you a review unit if you're not going to play ball." In other words, Apple feeds the writers who will do its bidding, and starves the ones who won't follow its messaging.

In addition to delving into details about Apple's apparent media manipulation, Gurman also covers the shift in attitude as the company has transitioned from Steve Jobs' leadership to Tim Cook's. This has included the retirement of Katie Cotton, who was reportedly seen as a "tyrant" by her employees. Cotton, who was close to Steve Jobs, apparently did not mesh well with Tim Cook's desire to portray Apple as a "friendlier" company, leading to her departure.

Apple is said to be searching for a new head of PR to replace Cotton, and in the meantime, Apple's PR teams are run by two longtime employees who report directly to Cook. Under Cook, Apple's internal policies have shifted somewhat, from his direct apology for the Apple Maps app to his efforts to discredit Yukari Iwatani Kane's anti-Apple narrative Haunted Empire: Apple After Steve Jobs.

Gurman's full examination of Apple's PR team is well worth a read and covers a large range of topics. A list of links to the 9-part series is below:

- Apple Events and Shredded White Booklets
- Introducing the Teams: How PR is Organized at 3 Infinite Loop
- Strategies: The "Art of Deep Background" and Controlling the Press
- The Departure of a "Tyrant"
- Two Heads in Place of One
- Controversies: From Maps to Beats to Haunted Empires
- Product Reviews, Briefings, & Reviewer's Guides
- Steve Jobs and the Process Behind Press Releases
- A Friendlier, More Transparent Future?

And when we will see the multipart expose on the PR practices of Google, Samsung etc. And will those take as many pot shots at the company as this seems to. Pointing out that they like to tip off bloggers about negative articles, being upset about articles that don't go the way they like, giving review units to folks that are sure to give a nice review.

Every company does this kind of thing, not just Apple. So why the focus on Apple. Gurman will say because Apple is a huge company and should be able all this blah blah. Truth is, page hits. Apple gets way more than any other company. Thus sites that rely on hits for ad revenue focus on Apple

taptic
I think there are at least 10 members on here that work for Apple... just to troll us and shut us up when we're wrong and whining about some Apple thing.

charlituna
And when we will see the multipart expose on the PR practices of Google, Samsung etc. And will those take as many pot shots at the company as this seems to. Pointing out that they like to tip off bloggers about negative articles, being upset about articles that don't go the way they like, giving review units to folks that are sure to give a nice review.

Every company does this kind of thing, not just Apple. So why the focus on Apple. Gurman will say because Apple is a huge company and should be able all this blah blah. Truth is, page hits. Apple gets way more than any other company. Thus sites that rely on hits for ad revenue focus on Apple
Score: 13 Votes (Like | Disagree)

HE15MAN
What if Apple really owned this site :eek:
Score: 11 Votes (Like | Disagree)

Excuse me that I prefer for folks to have a balanced view of the world.


Wow!:eek: My mistake with your name and gender notwithstanding, how about not tearing me a new one for defending your point. I said you mean well because I thought you meant well. Regardless of how angry you come off. Lesson learned. No need for civility I guess.:confused:
Score: 8 Votes (Like | Disagree)
Read All Comments