Last week, a wiring schematic said to be for the iPhone 6 was initially interpreted to be referring to the device's RAM, showing the same 1 GB of memory for the A8 as found in the current A7 chip. That was quickly determined to be an incorrect interpretation of component being shown in the schematic, however, and Apple's plans for RAM in the iPhone 6 have remained uncertain.

A new photo leak from Feld & Volk [Instagram page] and Sonny Dickson showing an assembled logic board from the 4.7-inch iPhone 6 has revealed a number of pieces of information already, and it appears from one of the photos that the A8 chip on the board does indeed include 1 GB of LPDDR3 RAM. 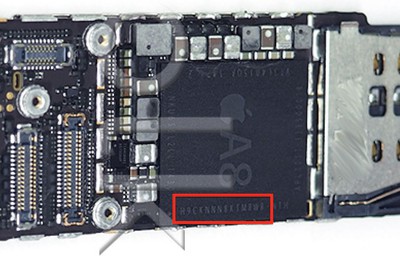 As pointed out by MacRumors forum member commander.data, a silk-screened part number on the A8 reveals that the package-on-package contains Hynix RAM. Based on Hynix's part number format, the character in the eighth position reveals the amount of RAM in the package, with an "8" denoting 8 Gb (1 GB) and a "B" denoting 16 Gb (2 GB). While it is a bit difficult to read the part number clearly given the distance and angle in the photo, our staff and several posters in our forum agree that the character very much appears to be an "8", indicating 1 GB of RAM.

Crossmax
Can't give customers 2 GB ram, cause the incremental cost of that extra GB of ram would ruin the margins, and shareholders would not be happy.
Score: 53 Votes (Like | Disagree)

AngerDanger
I'm sure there could be a nice spin on this:

"Enjoy the same, familiar one gigabyte of RAM experience that you've grown to love!"
"One gigabyte of RAM per screen—just the way it was meant to be."
"Get to the heart of your content more directly without all of that pesky, quickly accessed memory."
Score: 43 Votes (Like | Disagree)

Can someone explain to me why this is so bad? iOS runs flawlessly, and has been this way for all three iPhones that I've had. Why does the iPhone need more RAM if the os is perfectly optimized for 1GB?


If by flawless you mean the constant reloading on Safari (a problem on OSX as well), frequent app killing, and frequent low memory errors, then yes, iOS runs fantastically on 1GB of memory.
Score: 40 Votes (Like | Disagree)

MartinAppleGuy
This is great news for iPhone 6S sales!
Score: 40 Votes (Like | Disagree)

Monday May 10, 2021 10:41 am PDT by Juli Clover
Apple's upcoming iPhone 13 models will be slightly thicker than the iPhone 12 models and will also feature larger, thicker camera bumps with lenses that protrude less, according to iPhone 13 schematics seen by MacRumors. The new iPhone 13 and 13 Pro models are expected to feature a thickness of 7.57mm, up from 7.4mm in the iPhone 12 models. That's an increase of 0.17mm, which won't be hugely ...
Read Full Article • 175 comments