With the 4.7-inch iPhone entering mass production this month, part leaks and rumors surrounding the device are beginning to pick up. Several different internal and external parts said to be destined for the iPhone 6 have surfaced and today, Apple.club.tw [Google Translate] has shared images depicting the flex cable for the Lightning and headphone parts along with another image of the iPhone 6 rear shell. 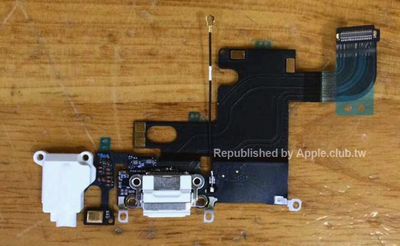 These two holes appear to accurately line up with the dual holes in the bottom left of the rear shell of the device, suggesting the headphone jack would fit correctly into the iPhone 6 rear shell and lending credence to the authenticity of the part.

As we creep closer to the prospective September launch date of the iPhone 6, part leaks may grow even more frequent. Thus far all part leaks have centered around the 4.7-inch iPhone, and this is because it is believed to be entering mass production ahead of the 5.5-inch version. The 5.5-inch iPhone 6 may enter production in August or September according to rumors, which means 5.5-inch part leaks could pick up over the next month or two as well.

Rumors spoil the fun, even if its true :( . Same thing happened with i5 and i5s. Please enough with these rumors.


Are you actually serious?

What is this site called?
Score: 30 Votes (Like | Disagree)

i'm willing to bet it will not come out with those hideous bands. surly someone who was in charge of the design see's what we're seeing....right? :eek:

JBaker122586
All parts leaks have centered around the 4.7" iPhone because that's the only one that actually exists.
Score: 11 Votes (Like | Disagree)

nagromme
Is there something actually wrong with the depicted antenna bars, or is that just a hilarious meme I missed out on, like "Safari is snappier"?

What should be different about them? I don't get it. Thinner? Thicker? Radio-opaque etal? Do people truly care? It's a line--it's the most minimal level of detail that a necessary part can have. The glass antenna bars on my iPhone 5 are massive in comparison. Which looks better? It's a wash to me. My only opinion, unchanged for years but highly subjective: black looks better than white.

If people do seriously mind those plastic bars, how did they not pitch a tireless fit over the way the iPhone faceplate has stuck out, asymetrically vs. the rear face, on every iPhone (except the 5C) since the iPhone 4? :p
Score: 7 Votes (Like | Disagree)
Read All Comments