Apple's iOS 7 adoption rate continues to grow, even as the release of iOS 8 approaches. As of yesterday, 90 percent of devices connected to the App Store are running iOS 7, according to new numbers posted on Apple's App Store developer support page.

The new milestone, which comes 10 months after the operating system's original release, is a three percent increase from installation numbers of 87 percent back in April.

As adoption of iOS 7 has climbed, iOS 6 installation rates have dropped slightly, going from 11 percent in April to 9 percent on July 13. Earlier operating systems continue to run on two percent of devices.

Apple's mobile operating systems have traditionally seen quick adoption rates due to the company's easy over-the-air updates, and just three months after being released, iOS 7 was on 74 percent of devices. iOS 8, coming this fall, will undoubtedly see a similarly rapid adoption rate, overtaking iOS 7 in a matter of weeks.

iOS 8 includes a number of new features that will be highly appealing to consumers, including interactive notifications, third-party keyboard support, and several new Continuity features that allow an unprecedented level of integration between iOS devices and Macs.

PocketSand11
Add my grandma to that list. My aunt updated her 4S to iOS 7 for some reason. Now she's confused, and the Phone app randomly froze today. Hopefully she'll remember my lesson on how to force-quit apps now that that's actually a problem.

Shouldn't an irreversible system-wide update at least require the passcode, or better yet, the Apple ID used for that phone?! :mad: Meanwhile, you need sudo to do anything in Debian other than opening OpenOffice.

My old iMac can run the latest OS X. iOS 7 support iPhone as old as 4s. Why do you have to upgrade your hardware?

Different people have different definitions of "old". I'm guessing he's got a G5 that works fine and would rather not be forced to buy a new computer just for his iPhone. Oh yeah, and even though iOS 7 "supports" the 4S, I would not install it on there.

That's not the worst part. 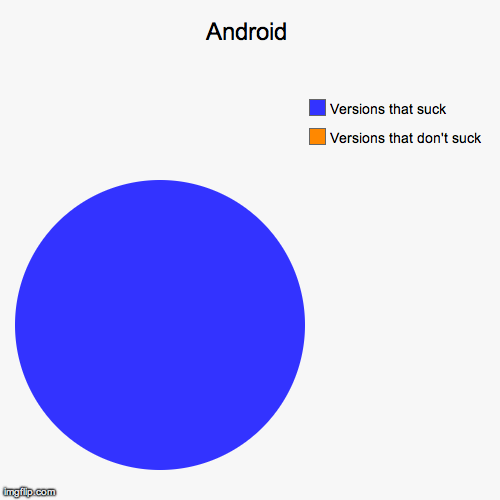 
I have been on Android exclusively since the day the Nexus 4 came out. Got the Nexus 5 and Nexus 7 on day one as well. This could not be more true. And I can't wait to get off Android and move to the iPhone 6 when it comes out. Once you get over Androids customization factor, you realize it is just an ugly, inconsistent, unstable, and poorly optimized OS.

Now bring on the Android fanboys who will undoubtedly disagree and tell me how wrong I am.
Score: 14 Votes (Like | Disagree)

ZacNicholson
some of us were forced to upgrade because our FaceTime wouldnt work anyone on iOS 6...
Score: 12 Votes (Like | Disagree)