Apple today released the third beta of iOS 8, which brings a number of improvements, changes, and bug fixes to the beta software that was first introduced on June 2.

iOS 8 beta 3 also includes several minor interface tweaks and modifications that make the beta feel both faster and more polished. We've gathered up a comprehensive list of the enhancements that have been bundled into the release below, and to find out about all of the under-the-radar tweaks in iOS 8, make sure to check out our iOS 8 Hidden Features Roundup.

iCloud Drive - There's a new popup window in beta 3 giving users the option to upgrade to iCloud Drive. Introduced at WWDC, iCloud Drive lets users store any type of file. Though iCloud Drive can be turned on, it does not appear to be fully functional at this time. 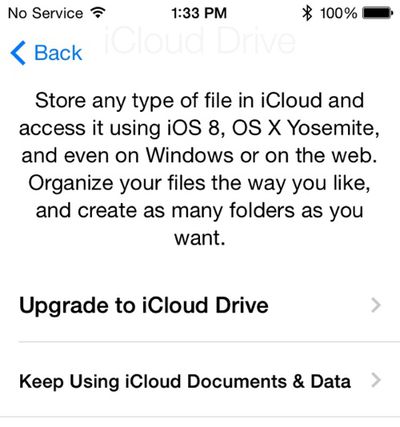 Handoff - There's a new Handoff setting in the General menu of the Settings app that allows users to toggle Handoff on and off. Handoff allows users to seamlessly transfer tasks between iOS and OS X.

QuickType Keyboard - There's a new option in the Keyboards section of the General menu in the Settings app that lets users toggle QuickType on and off.

Weather - Some minor changes have been made to the way information is displayed within the Weather app.

Photos - In the Photos app, Shared Photo Streams have been renamed Shared Albums. Events and albums from Aperture are now available again in the Photos app as well, and there's a new indicator for the amount of time left before Recently Deleted photos are permanently removed.

Messages - In the Settings menu for Messages, there's a new option to automatically keep audio and video messages. Normally, these messages are deleted after a short period of time to save space.

WiFi Calling - T-Mobile users with iOS 8 beta 3 can now access WiFi calling. WiFi calling lets users make phone calls over WiFi instead of using a Cellular connection. WiFi calling can be enabled in the Phone section of the Settings app and requires users to enter an emergency address.

Custom Keyboards - Developers are now able to move the cursor location with a custom keyboard in iOS 8 beta 3.

Additional features in iOS 8 beta 3 will be added here as they are discovered. Apple is likely to continue pushing regular updates to iOS 8 at two or three-week intervals to bring minor performance boosts and changes ahead of the operating system's launch. iOS 8 is expected to be released to the public in the fall. For more information on iOS 8's features, major and minor, make sure to check out our roundups.

Agree. *off to start a battery life thread*
Score: 8 Votes (Like | Disagree)

Here are the new walpapers =)
Score: 7 Votes (Like | Disagree)

Traverse
I'm still hoping for an iCloud Drive App. Having access to files only within apps still seems annoying.
Score: 5 Votes (Like | Disagree)

odedia
Is it already stable enough for a day-to-day iPhone?
Score: 4 Votes (Like | Disagree)
Read All Comments