Over the past few days, we've been exploring some of the system requirements for Apple's Continuity features such as Handoff, noting that an apparent requirement of Bluetooth LE support for Handoff would leave out a number of older Macs that are otherwise compatible with OS X Yosemite. 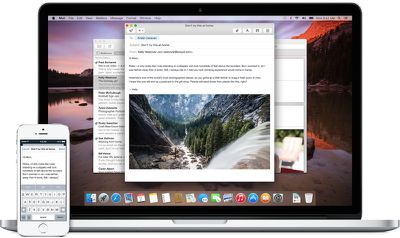 In discussing the limitations for Handoff support, some MacRumors forum members suggested that adding an inexpensive third-party Bluetooth LE adapter to an older Mac might be enough to add support for the feature. Unfortunately, several forum members have discovered that this does not appear to be the case.

One forum member has shared details of their testing, noting that in tests with a 2010 MacBook Air that does not include built-in support for Bluetooth LE, adding IOGEAR's Bluetooth 4.0 USB Micro Adapter works out of the box to add Bluetooth LE support to the machine, but does not enable support for Continuity features such as Handoff or AirDrop.

System information for 2010 MacBook Air with IOGEAR Bluetooth LE adapter
While OS X Yosemite remains in beta testing and things could change before final release, it appears that Bluetooth LE support alone is not sufficient to enable Handoff and that Apple is instead enforcing a stricter requirement for built-in Bluetooth LE support, perhaps by defining specific models that are able to use the feature.

Beyond Handoff, Apple is also adding a number of other features under the Continuity umbrella, not all of which require Bluetooth LE support. For example, the new phone relay feature that will allow users to make and receive iPhone calls right from their Macs relies on Wi-Fi rather than Bluetooth, meaning that more devices should be compatible with this feature and it is likely to work over longer distances.

OS X Yosemite and iOS 8 are scheduled to launch to the public in the fall of this year, likely around the September-October timeframe.


says the person with unlimited income?
Score: 14 Votes (Like | Disagree)

KaPOWitsCHRIS
As long as the SMS & Calls work over Wifi I'll be happy.
Score: 12 Votes (Like | Disagree)

kronusdark
This is beta for a reason, file a bug.
Score: 12 Votes (Like | Disagree)

iBlazed
It's a bit ridiculous that if you spent thousands on a new Mac Pro in early 2013 that you can't use this feature even if you get an adapter. I understand why it only works on Bluetooth LE, and it should remain that way because of the low energy usage, but it definitely should work with an adapter. The adapter is completely pointless on a laptop, but for iMac and Mac Pro it should be an option.
Score: 11 Votes (Like | Disagree)

moldy lunchbox
I know Apple is in the business of selling computers, but I don't see this as a sole reason to upgrade machines. Maybe a slight reason, but still nice try Tim Cook.
Score: 9 Votes (Like | Disagree)

DavidBlack
Really sucks for those that don't have a 'newer' Mac.
Score: 9 Votes (Like | Disagree)
Read All Comments

Friday December 2, 2022 10:54 am PST by Juli Clover
Google is continuing on with its attempt to convince Apple to adopt the RCS messaging standard, publishing a new "it's time for RCS" blog post. Promoted heavily by Google, RCS or Rich Communication Services is a messaging standard that is designed to replace the current SMS messaging standard. It provides support for higher resolution photos and videos, audio messages, and bigger file sizes, ...
Read Full Article • 596 comments

Monday December 5, 2022 11:44 am PST by Juli Clover
Due to production issues at Apple supplier factories in China, the iPhone 14 Pro and iPhone 14 Pro Max are backordered and basically out of stock at every store. If you were planning to gift or receive an iPhone 14 Pro model for the holidays and didn't already get one, you're basically out of luck because they're gone until late December. Subscribe to the MacRumors YouTube channel for more ...
Read Full Article • 110 comments