While rumors last week indicated that Apple would be launching minor updates to its iMac line, Apple today unveiled a new lower-cost 21.5-inch iMac starting at $1,099. Previously, the entry level iMac started at $1299. 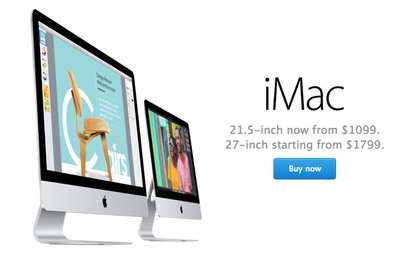 KGI Analyst Ming-Chi Kuo predicted last year and earlier this year that Apple would be launching a lower-cost iMac in 2014 to bolster sales in critical foreign markets.

Apple is also rumored to be working on Retina Display-equipped iMacs, as recent evidence in the OS X Yosemite developer preview suggested such models were in the works. While there is no specific release date for a Retina iMac, Apple could launch the new desktop computer later this year.

Apple's new entry-level iMac is available today through Apple's various retail locations and online store, and shows an availability of "within 24 hours."

Update 5:41 AM: Apple has issued a press release announcing the lower-cost iMac.

tomhumphrey
The fact that none of the iMacs come standard with a SSD at this point is shocking. I would never buy or use a computer without one now.
Score: 38 Votes (Like | Disagree)

ArtOfWarfare
1.4 GHz in a desktop computer at this price?

Just checked Apple's store and it says the same thing.

1.4 GHz for $1099 or 2.7 GHz for $1299. They're the same line of CPU, so it's an apples to apples comparison. For an 18% increase in price, you double the CPU and the storage capacity. The GPU also changes, but it changes lines entirely so there's no easy way to say how much better one is than the other.
Score: 31 Votes (Like | Disagree)

BJonson
For that price you could get a 11" macbook air and a monitor and get a PCIe SSD for free and have the portability if you need it. This new option makes no sense at all.
Score: 30 Votes (Like | Disagree)

When will Apple release touchscreen iMacs?

$999 would have been the price point to go for, but I guess it'll be available for that after retailer/educational discounts.
Score: 27 Votes (Like | Disagree)

I'm very surprised - this strikes me as nothing short of a terrible move. A dual core ULV iMac that is still on the wrong side of $1000?

And far too expensive for what it is.
Score: 18 Votes (Like | Disagree)
Read All Comments