Adobe today announced the launch of a new suite of mobile apps and accompanying hardware that includes its Adobe Ink digital pen and its Adobe Slide digital ruler. Previously known as the "Mighty" stylus and the "Napoleon" digital ruler while in development, Adobe's new tools were created in partnership with Adonit, the company behind a line of popular styluses. 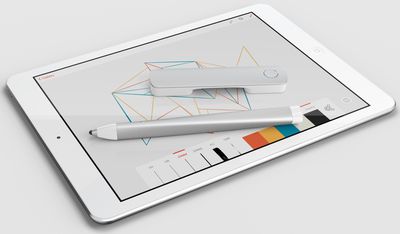 The Ink and Slide are complemented by two new iPad apps, Adobe Sketch and Adobe Line. Sketch is a social sketching app for free-form drawing, with a set of simple tools (pencil, ink pen, blending markers, and eraser) and Behance integration to share sketches with the creative community. Line allows iPad users to create precision drafts and drawings, with a reimagining of traditional tools like rulers, T-squares, and shape templates.

Along with Line and Sketch Adobe is introducing Photoshop Mix, an iPad app that interfaces with Photoshop on the desktop and makes it easy for users to do masking and compositing of images. It's a simple way to create masks on a touch screen, which can then be transferred to the desktop version of Photoshop. It is able to open PSD files and it includes features like Content Aware Fill and Camera Shake Reduction.

There are also new Creative Cloud apps for the iPhone and the iPad, which allow Creative Cloud members to access and manage their files and assets from their mobile devices. Finally, the mobile version of Adobe Lightroom, initially available only for the iPad is now expanding to the iPhone.

Adobe's new apps have been built using the Creative SDK, which is currently undergoing private beta testing but will be released to developers in the future, allowing for additional apps that will be able to take advantage of Adobe's new hardware and Creative Cloud connectivity.

Adobe has also updated all of its Creative Cloud apps for the desktop and introduced expanded Creative Cloud profiles to improve connectivity between mobile devices and apps.

Ink and Slide, Adobe's new hardware tools, are sold in a set and are available immediately from Adobe.com for $199. Ink and Slide are currently limited to U.S. customers only, but Adobe has plans to expand availability in the future. Adobe's new apps, Sketch, Line and Photoshop Mix will all be from the App Store today for free, as will the new Creative Cloud app and Lightroom for iPhone. Download links below:

Steve Jobs just rolled over in his grave. I remember him distinctly saying that the iPhone and iPad did not need a stylus. At least it wasn't Apple that sold it.


You all need to understand the distinction between needing a stylus to navigate the UI (bad), and having a pressure sensitive, fine point stylus for digital painting, sketching, note taking, and all other kinds of stuff (great).

Steve Jobs never said styluses are bad. He said smartphones and tablets that require a stylus to be used are bad.
Score: 7 Votes (Like | Disagree)

Jessica Lares
Played around with the apps. Adobe Line is pretty cool even without the hardware.

The fact that it's limited to the Adobe apps are a no go for me. I find it ridiculous that they're now trying to sell us $100 styluses for different situations too.
Score: 3 Votes (Like | Disagree)

2457282
I gave up on Adobe a while back and do not have any of their software. Does anyone know if they have improved in quality or is everything they do still buggy and full of security holes?
Score: 3 Votes (Like | Disagree)

Steve Jobs just rolled over in his grave. I remember him distinctly saying that the iPhone and iPad did not need a stylus. At least it wasn't Apple that sold it.


I think we can all stop claiming that Steve Jobs is doing anything with any announcement pertaining to Apple. He's gone. Sad but true. Rest assured his vision is not always going to be followed with current management.

No one said the iPhone or iPad needed a stylus but if you want to draw, the days of using your finger tip were long gone with the first iPad. A stylus is necessary for those who create some pretty wicked art on their tablet.

As for the product shot and the wiggly reaction surrounding the stylus laying on the screen, it's a product shot. Pretty sure the iPad is okay.
Score: 2 Votes (Like | Disagree)

mdriftmeyer
$199? People truly are gullible, in the eyes of Adobe.
Score: 2 Votes (Like | Disagree)

nagromme
The Mix app looks interesting although I already use the DisplayPad app as a "poor man's Cintiq" for Photoshop.

And in the absence of a real wacom-style stylus accessory from Apple, I'm always interested to see new stylus solutions.

As for the ruler... my $4 stylus has a very good ruler: a box of Junior Mints. Pro top: don't eat the mints--an empty box is less rigid.

I gave up on Adobe a while back and do not have any of their software. Does anyone know if they have improved in quality or is everything they do still buggy and full of security holes?

That was never true. At worst, 40% of everything they do is buggy and full of holes :p

Hmmm. You do realize that this is just a product shot, right? Not to mention, who cares?

I care: laying or dropping your stylus on your work surface is an actual daily likelihood, not a contrived promo shot situation. I prefer zero metal on a stylus.

Which software specifically? If you can isolate which software you had issues with perhaps others can weigh in on your grievances.

* Which remains useful for standalone interactive stuff that needs a fast turnaround for businesses that still use Mac or Windows.
Score: 2 Votes (Like | Disagree)
Read All Comments

Monday September 26, 2022 7:34 am PDT by Sami Fathi
Today marks exactly two weeks since Apple released iOS 16 to the public. Besides the personalized Lock Screen, major changes in Messages, and new features in Maps, the update has also seen its fair share of bugs, performance problems, battery drain, and more. After major iOS updates, it's normal for some users to report having issues with the new update, but such reports usually subside in...
Read Full Article • 209 comments