Microsoft earlier this year introduced Cortana, an intelligent virtual assistant to compete with iOS' Siri and Android's Google Now. Cortana was launched as a Windows Phone 8.1 feature, but a new report from Search Engine Land suggests Microsoft may expand the service to iOS and Android. 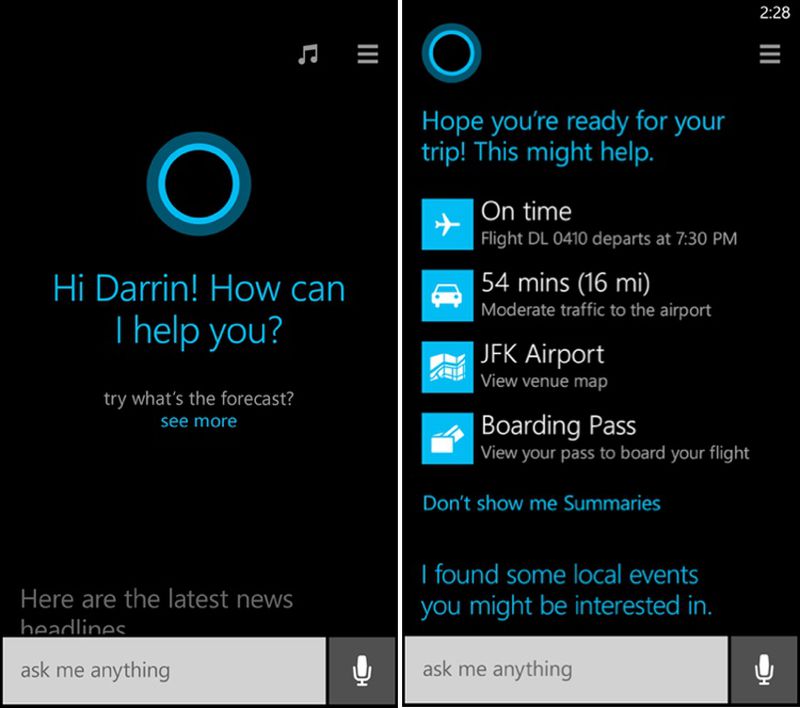 Speaking at the SMX Advanced conference in Seattle yesterday, Windows Phone Group Program Manager Marcus Ash said the company wants Cortana to be "pervasive" both geographically and among mobile platforms.

We want to scale Cortana internationally and across devices. The Android/iOS question is interesting. We’re asking, would Cortana be as effective if she didn’t have access to the details on your phone? We’re still trying to get Cortana adopted on Windows Phone and figure out what it wants to become there. But we’re actively talking about this.

I think it’s natural to think that an assistant that only runs on one device … the idea that she will be very pervasive is important to us.

Cortana is powered by Microsoft's Bing search engine and Tellme's natural language processing and speech-recognition technology Microsoft acquired in 2009. The assistant is launching first on Windows Phone 8.1 and the Xbox One game console. It is named after the artificial intelligence in Microsoft's popular Halo game series and has a female voice powered by actress Jen Taylor, who also provides the voiceovers for the video game.

WhoDaKat
Without OS integration, it would be worthless. About the only thing it could do is a web search.
Rating: 6 Votes

Microsoft CEO: Thats great! We spent a lot of hard work and money on it.

Microsoft Engineers: Yea, but too bad only dozens of people get to use it :(

Microsoft CEO: ugh...Just give it to them already...
Rating: 4 Votes


Well yeah, the vast majority of windows phone don't have this update because it's not out yet. It's coming out next week sometime. Plus, as far as I know, every single WP8 phone out there should be able to run the 8.1 update.
Rating: 2 Votes

Did you forget about Office for Mac? Remote Desktop? One Note?

I agree with you on Android. It's a fugly interface. Windows Phone actually has a polished interface as well as iOS. I would certainly switch to Windows Phone from my iPhone if it ever came a time I did not like Apple's business.

I can honestly say I don't think many Android devices would sell if it couldn't be rooted.


Honestly?.. U do realise that probably 1% of androids are maybe rooted.. It's only for super tech heads..

And with the quote that the android interface is fugly... Wow.. bar Google devices are other handsets have a slightly different interface.. but it's still essentially icons and widgets... Or just icons if u wants.... As opposed to just.... Icons... I can see how you think ios is beautiful...

Yeah exactly, I'm glad someone else gets the frustration. At least OS X asks first if you want to restart now or later.


Is a restart every 3 weeks a frustration?..
Rating: 2 Votes

You need to update your perceptions - Windows' mobile OS is making up ground. It's still a long way off Android and iOS, but people used to make the same jokes about Android...


Except the difference is that the market is much more saturated now that was when Android was starting out. Microsoft entered very late into the game... Sure they had Windows Mobile before that, but they chose not to include backwards compatibility with it in Windows Phone, thus eliminating their entire existing user base. (And worse, a bitter taste in many consumers' mouths from this abandonment; Myself included)
Rating: 2 Votes

ArtOfWarfare
Sometimes pictures of Windows 8.1 for mobile make me think of the possibility of going to a Windows Phone. I have virtually no interest in Android (nothing feels remotely polished on it - it all feels like an elaborate demo that will be cool someday if anybody ever bothered finishing it instead of halfassing more features) but this virtual assistant in Windows 8.1 looks really appealing.

It is named after the artificial intelligence in Microsoft's popular Halo game series and has a female voice powered by actress Jen Taylor, who also provides the voiceovers for the video game.


This just seems incredibly creepy to me, but possibly only because I know how many teenage boys have fantasies about her. I feel like Microsoft is somehow trying to capitalize on that.
Rating: 2 Votes

danielsutton
Would Apple allow a competitor to Siri in the App Store? The company's policy is to block apps that reproduce functions of iOS or closely resemble features of other apps in the store.

What a long way this has come though, where Microsoft is now actively developing software for platforms other than its own Windows OSs.
Rating: 2 Votes

I think Cortana on iOS would be useless. Microsoft copied Siri and Google Now to catch up. Why would an iOS user stop using Siri in favor of a copied MS version?


Because even though it's a "copy", I hear it does quite a few things better than either Siri and (to a lesser extent) Google Now.

I'd say Siri's alright. It has its occasional uses, but considering how tightly Apple has it tied down, I'd say it's more a fluff feature than an actual useful tool. Google Now and Cortana look more like something I'd use on a daily basis.
Rating: 1 Votes

Oh yeah definitely. I have a lot of things open in various programs and restarting is a pain. Given that every Windows has improved upon uptime, why can't I take advantage of it?