Apple has expanded the content available on iTunes Radio with a new ESPN Radio station and more than 40 local National Public Radio (NPR) stations. First noticed by AppleInsider, the new stations can be accessed directly within iTunes Radio on both iOS devices and desktop computers via a search, though the new stations may be available to some users in the Featured section.

The ESPN Radio station on iTunes Radio offers the same live streaming content that is available through traditional ESPN radio affiliates, and the schedule of content can be found on the ESPN Radio website. Content includes national sports talk shows including Mike & Mike, The Freddie Colman Show, The Dan LeBatard Show, and more. 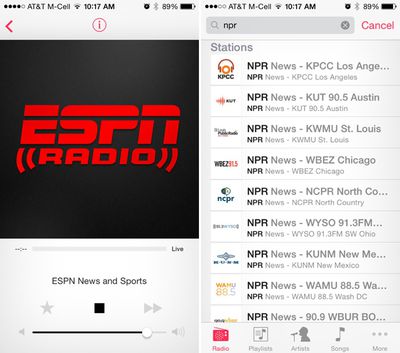 Special events, such as the 2014 FIFA World Cup, Major League Baseball playoffs and World Series, and college football will be broadcast on the station, kicking off with the broadcast of the Atlanta Braves vs. the Colorado Rockies game on Wednesday, June 11 at 5 PM Pacific Time.

"We are thrilled to make our industry-leading sports talk and championship play-by-play content available to fans via iTunes Radio," said Traug Keller, senior vice president, ESPN production business divisions. "And we are excited to partner with Apple to expand our digital reach. Our fans can look forward to expanded ESPN Audio offerings on both the national and local sports levels in the future."

Along with the new ESPN station, there are over 40 new NPR stations from cities like Los Angeles, San Diego, Chicago, Austin, and more. NPR first came to iTunes Radio back in March with the launch of a national news channel and at that time, NPR officials promised additional content from local stations. Content provided will include a mix of live and taped news.

iTunes Radio, which launched alongside iOS 7 last September, is still limited to the United States and Australia. Apple does, however, have plans to expand iTunes Radio to the UK, Canada, and New Zealand in the near future, eventually bringing the service at least 100 countries.

ArtOfWarfare
Should we take this as an indicator that Apple is still clueless about what the competition is doing? Or is Apple confused about who their competitors are? It sounds more like Apple is trying to outdo I Heart Radio, which I don't think can be done (how could you possibly beat free, nearly every station, and available on every device?), but shouldn't their target be Pandora and Spotify?

They should have bought Pandora or Spotify if they really wanted to buy their way into this arena... Buying Beats for it was just dumb.
Score: 5 Votes (Like | Disagree)

dannyyankou
Why listen to it on FM for free when I could use up all my data?!
Score: 4 Votes (Like | Disagree)


It's those record company executives. They only allow licensing on a region by region of for large markets country by country basis to ensure that new music services don't drastically reduce their already dwindling income. It took Spotify two years to get set up in the U.S. after it had covered most of Europe.
Score: 4 Votes (Like | Disagree)


Agreed. Why it's not yet here in Canada escapes me. That it got to Australia before Canada is bizarre.
Score: 4 Votes (Like | Disagree)

IJ Reilly
NPR stations (and all of their streaming content) have been available through the NPR app for years, so it's difficult to see it being added to iTunes Radio as big news.
Score: 3 Votes (Like | Disagree)
Read All Comments