Near the end of today's keynote at the Worldwide Developers Conference that included a first look at iOS 8 among other things, Apple revealed what iOS devices will be compatible with its new mobile operating system this fall. That list included the iPhone 4s, iPhone 5, iPhone 5c, iPhone 5s, iPod touch 5th generation, iPad 2, iPad with Retina Display, iPad Air, iPad Mini, and iPad mini with Retina Display. 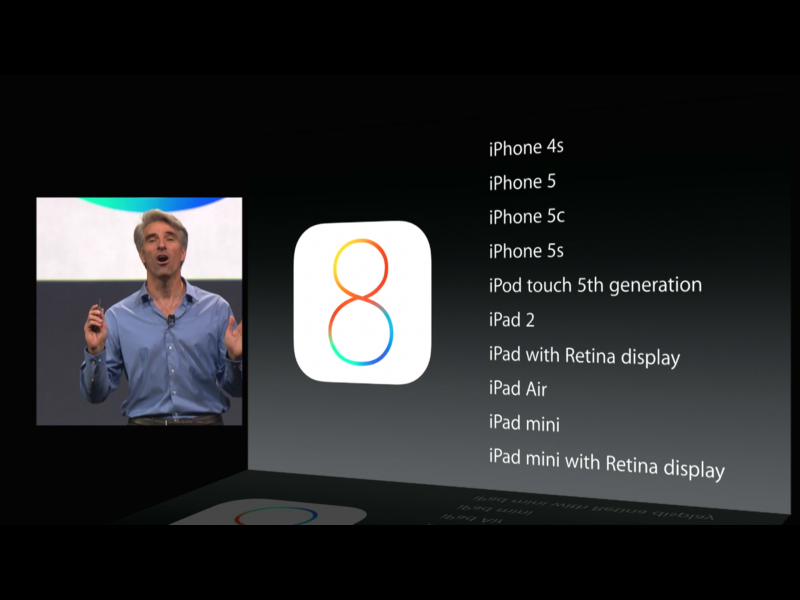 Notably missing from the list is the iPhone 4, which saw compatibility with iOS 7 last year and even saw improved performance with iOS 7.1. Apple restarted iPhone 4 production for countries including Brazil, India and Indonesia earlier this year, but the device will likely be now be discontinued again in the near future.

What about iPad 3? Is it included in iPad with Retina Display?


Considering the iPad 2 is supported, I'd say the newer model should be fine...
Rating: 10 Votes

So no Airdrop between iOS and OSX. Damn it. :mad:


in fact they've mentioned that it will be available. ;)
Rating: 8 Votes

So no Airdrop between iOS and OSX. Damn it. :mad:

Overdue. iPhone 4 shouldn't have got iOS 7.

Why? It runs fine.

0098386
Phew! My 4S has a bit more life left. They'll have to drag me kicking and screaming away from this form factor.
Rating: 5 Votes

Man, people keep complaining about being dropped. Have you thought about what would happen if you put iOS 8 on a 4 years old device? Your phone would be ridiculously slow, apps may crash, you'll probably go on forums to bash Apple, then call Apple for support, tying up their support resources.


If Apple continued to support their older OSs, there wouldn't be a problem. Unfortunately, they don't. The day iOS 8 and OS X Yosemite are released, iOS 7 and OS X Mavericks are unsupported and will slowly lose functionality and compatible apps.

That's a bit provocative wouldn't you say? I'm sure they still support it, just won't bring iOS8 to it.


Nope. Once you're behind in either OS X or iOS, you're dead to Apple.
Rating: 4 Votes
[ Read All Comments ]