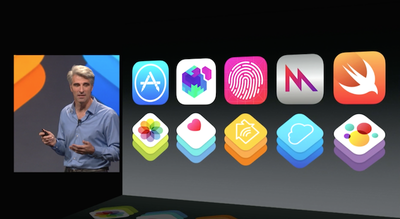 The announcement that got the biggest reaction from developers was Swift, a new programming language for Cocoa and Cocoa Touch that Apple calls modern, fast and powerful and designed for safety.

Swift is the result of the latest research on programming languages, combined with decades of experience building Apple platforms. Named parameters brought forward from Objective-C are expressed in a clean syntax that makes APIs in Swift even easier to read and maintain. Inferred types make code cleaner and less prone to mistakes, while modules eliminate headers and provide namespaces. Memory is managed automatically, and you don’t even need to type semi-colons.

Swift also includes "Playgrounds", which allows developers to see the results of their code in a side panel in real time. The developer community appears extremely excited about Swift, with Realmac's Nik Fletcher saying he had "no words". Notable Apple pundit and developer John Gruber said that Swift is "huge, huge news" and the "future of all Apple development".

iCloud has also been partly opened up for developers with a powerful new framework for developers called CloudKit. It allows developers to avoid costly and time-consuming coding the server-side of applications, with Apple providing huge amounts of cloud storage and computing power for free, albeit with extremely high limits to encourage tight coding.

Leverage the full power of iCloud and build apps with the new CloudKit framework. Now you can easily and securely store and efficiently retrieve your app data like structured data in a database or assets right from iCloud. CloudKit also enables your users to anonymously sign in to your apps with their iCloud Apple IDs without sharing their personal information.

Additionally, Apple announced lots of new APIs for developers to take further advantage of iOS. Extensibility allows apps from the App Store, which are usually isolated in sandboxes, to communicate with each other. For instance, the Pinterest app could be updated to provide a sharing option in Safari, or Bing could be updated to provide translations within Safari. Another example includes the Photos app, which can use filters from third-party apps like VSCO.

Apps from the App Store can send widgets to the Today pane in the Notification Center. For instance, ESPN's SportsCenter could add a widget within the Today pane that allows users to easily check the latest sports scores without having to open the app. Widgets are also interactive, allowing users to, for example, bid for an item on eBay from within the Notification Center.

Apple also announced its rumored home automation platform, called HomeKit. Previously, each home automation app used its own security protocols. Now, after working together with leaders in the home automation field, all apps can work together with a single protocol and secure pairings. This allows automated home devices, like Phillips' Hue lights, to work with Siri. Users can now tell Siri something like "Siri, get ready for bed" to turn off the lights, close the garage and whatever other functions are automated in a users' home.

Apple has also improved things for game developers, announcing Metal, which frees up resources for game developers to make better looking and more powerful games for iOS devices. For instance, EA would now be able to use its Frostbite engine for console games for games meant for iOS, like the upcoming Plants vs Zombies: Garden Warfare.

All of these SDK features are available for developers in the iOS 8 beta today, and will be available for consumers later this year in the fall. Much more information is available at Apple's Developer website.

iGuyS
These were pretty major announcements. Some of these things were assumed to simply never be a part of what Apple would do for developers or users. For example, people were assuming that a replacement for Obj. C would be years in the future, if ever. Likewise with allowing developers hooks directly into system apps to improve them.

Kind of thrilling. Not sure what to think about Apple now, to be honest. And I mean that in a good way.
Score: 10 Votes (Like | Disagree)

Swift was the most important announcement today!

How come this is not on the front page? :confused:


This announcement didnt make front page because Swift is not important or revolutionary technology. Beats reducing bass on their headphones... now that is front page news!
Score: 9 Votes (Like | Disagree)


What did you expect from a DEVELOPER CONFERENCE
Score: 8 Votes (Like | Disagree)

This was one of the few things I wasn't expecting.


Wow, this changes everything! Swift! :apple:

Swift was the most important announcement today!

How come this is not on the front page? :confused:
Score: 8 Votes (Like | Disagree)

Ralf The Dog
Metal blew me away. I thought it would be the IOS announcement of the decade. Then they hit us with Swift. (One more thing!)

I only wish Swift was available for server side development.
Score: 6 Votes (Like | Disagree)
Read All Comments