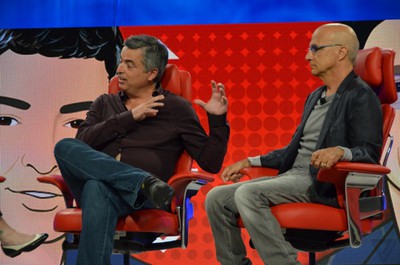 Apple internet chief Eddy Cue (left) and Beats co-founder Jimmy Iovine (right)
Cue mentioned that the iTunes Store and iTunes Radio hit new milestones, with the former selling its 35 billionth song and the latter now including over 40 million listeners around the world.

Speaking on the newly formed relationship between Apple and Beats, Cue noted that Apple's great rapport with artists, data on listening habits, and 800 million iTunes accounts with credit cards attached contributes a great deal. "We think all of those things, when you put them all together, it's on steroids with us together," he expressed.

Meanwhile, Iovine announced that Beats Music, currently limited to the U.S., now has 250,000 subscribers since it launched three months ago. A report earlier this month pegged the service's subscriber base at just 110,000 during the month of March, illustrating how the service has grown since then. By contrast, rival music streaming service Spotify reported earlier this month that it has 10 million paying subscribers worldwide.

Iovine added that Beats made a mistake by not offering in-app purchases from the start, and stated that 5 million people have "visited" the service since it launched. After today's announcement, the Beats Music iOS app was updated with an extended 14-day trial period and a price drop to its yearly subscription to $100 from $120.

bpeeps
There's just something about actually owning the physical copy that appeals to me so much more than streaming.
Score: 7 Votes (Like | Disagree)

tdtran1025
As much as Iovine likes to extoll the virtue of "whats next", Beats is irritating. It does not let me input the first choice as it forces me to accept lousy offerings till. I get tired of it and shut it off. I don't see any ingenuity in it Iovine!
And your headphones are not worth the price.
3bn dollars for those two guys to negotiate music royalties is nuts. Apple could have lessen demand, take a smaller profit and labels would sign.
Score: 3 Votes (Like | Disagree)

…..Meanwhile, Iovine announced that Beats Music, currently limited to the U.S., now has 250,000 subscribers since it launched (https://www.macrumors.com/2014/01/21/beats-launches-beats-music-app/) three months ago. A report earlier this month pegged the service's subscriber base at just 110,000 during the month of March, illustrating how the service has grown since then…..

That's actually quite impressive, for an upstart, in an industry that's getting pretty crowded.
Score: 3 Votes (Like | Disagree)

Spotify started didn't start out with millions of subscribers. These guys have been out 3 months and they've got a quarter of a million subscribers already.

Yeah, it would also make Apple make no profits. I think they need to increase the file size limitations with Match since there are people that are using 24 bit sound files and concerts where the file exceeds Apple's limitations and won't allow them to be stored on the servers.

I don't mind paying for Match because it's not that expensive to store on servers so I can have the content backed up safely, I just need them to allow larger files sizes.

As far as Beats is concerned? I just tried Beats Music trial. HATED IT. They paid $3 Billion for this? What a joke. It's awful. Now I see why Beats Music didn't get many subscribers.

I think Cook was stupid allowing Dre and Iodine as part of Apple. Dre is going to damage Apple's reputation amongst the educated crowd of people that are disgusted by Dre's music and the crowd of people he is associated with. Dre isn't a positive representation of the Black Community and it sets a bad example. Iovine isn't what I consider the best the music industry has to offer. He may know what the kids want, but that's not the only crowd Apple has to cater to. I think Apple would have better to have done a subscription service on their own, and if they wanted the headphone market, they could have easily spent far less money in having a better line of headphones created/mfg and just spend more time rather than trying to "BUY" into the market. Since Apple probably sells a large amount of Beats Headphones, it wouldn't be too easy to unseat them. All they would have to do is come out with a few models of headphones, removing the Beats headphones from the stores and putting their own headphones on the shelves instead. They could have gotten a cross section of the music industry that ranges from all of the styles of music to approve and endorse Apple's own design rather than just the rap/hiphop/superficial pop world endorsing Beats.

I think Cook has lost his mind, as far as I'm concerned, he blew it, and there might be some backlash because there are a lot of educated cultured people that do NOT endorse the thug/gang mentality that Dre brings to the table. He is DEFINITELY not a representation of the entire Black culture of America or the world for that matter. He and his buddies are illiterate, thugs that degrade women, each other, and promote a VERY disgusting way of life that Apple doesn't need.

Not even close to million users?

This has to be scaled fast to make sense.

Also - why not also buy dropbox to improve iCloud?

For headphones - Beyerdynamic is My choice for sound quality.
Score: 2 Votes (Like | Disagree)

borneo76
when it will be able to streaming outside the U.S?
Score: 2 Votes (Like | Disagree)
Read All Comments